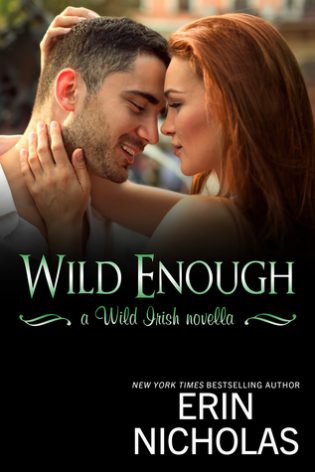 Heather Wilson would do anything for a friend, so when her college bestie and roommate, Greg, needs a last-minute date for a wedding, she doesn’t hesitate. She hops a plane to Baltimore—current bestie Peyton in tow—with plans to meet Greg at Pat’s Pub that evening. But they’ve barely arrived at the Irish bar before those plans have changed. Greg suddenly falls ill, then Peyton has to rush back to Sapphire Falls, leaving Heather to spend the weekend with her other college roomie—Seth.

The wild one. The impulsive and irresponsible one. The one who always made Heather feel something…undefinable. Neither of them did anything about their attraction in college, but with the chemistry still sizzling between them, and Seth’s well-known aversion to anything long term, he’s the perfect choice for a fling. One thrilling ride before she moves back home, rejoins the dating scene, and fines someone safe and responsible.

Heather has starred in plenty of Seth Dornan’s fantasies over the years, but the woman who invites him to her hotel room after a kiss at Pat’s Pub puts his fantasy girl to shame. And once he’s had an intimate taste of everything Heather has to offer, Seth wants so much more…including some things he’d never wanted before. He may still be wild and impulsive, but unlike the boy Heather knew in college, Seth is no longer afraid to go after who he wants—and keep her forever.