Join our newsletter to be the first to hear our latest news! Learn More
Home / Releases / Too Hot! by Avery Giles 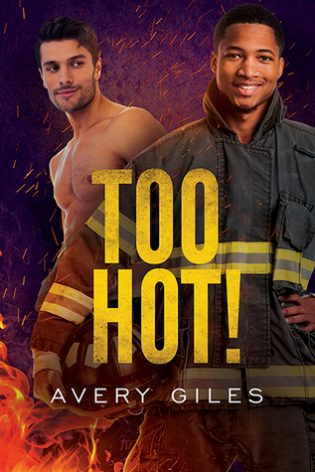 Too Hot!
by Avery Giles

Eli Johnson is not a hero. He’s just a guy who’s doing his best. His mother was a hero, though, and when she died, he dropped out of college to become a firefighter—a vocation she would have been proud of. He might not be able to save everyone, but he can do what she taught him: put more good out than bad.

Charlie Kinnear is definitely not a hero. When he ran into a burning building to save a trapped child, he was acting on instinct. He’s not expecting a medal, or for a handsome firefighter with a stunning smile to give him his oxygen mask. Charlie’s light-headed, and not from smoke inhalation.

Right as their romance begins, a serial arsonist terrorizes the city. As if that weren’t bad enough, Charlie appears at the scene of every fire. Eli hates to think it, but if someone wanted to get a firefighter’s attention—say, a certain sexy someone who coincidentally wandered into Eli’s life—what better way than by starting fires? Sparks are flying all right, and things may get too hot for Eli and Charlie to handle.