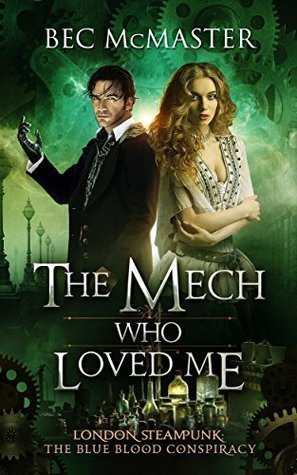 The Mech Who Loved Me
by Bec McMaster

Ava McLaren is tired of being both a virgin, and a mere laboratory assistant for the Company of Rogues. When a baffling mystery rears its head, it presents her with the opportunity to work a real case... and perhaps get a taste of the passion that eludes her.

Blue bloods are dying from a mysterious disease, which should be impossible. Ava suspects there's more to the case than meets the eye and wants a chance to prove herself. There’s just one catch—she’s ordered to partner with the sexy mech, Kincaid, who's a constant thorn in her side. Kincaid thinks the only good blue blood is a dead one. He's also the very last man she would ever give her heart to… which makes him the perfect candidate for an affair.

The only rule? It ends when the case does.

But when an attempt on her life proves that Ava might be onto something, the only one who can protect her is Kincaid. Suddenly the greatest risk is not to their hearts, but whether they can survive a diabolical plot that threatens to destroy every blue blood in London—including Ava.