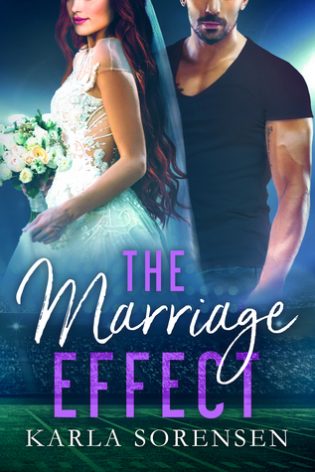 The Marriage Effect
by Karla Sorensen

Logan Ward doesn’t want any more women in his life.

Being a football player and legal guardian to his four younger sisters means his playbook is full. However, one of them just landed in the hospital, which gives his brother the shot he needs to challenge Logan for custody.

Legal counsel says there’s only one thing Logan can do—find himself a wife.

Like walking away from her modeling career without a thought of what might come next. She really doesn’t think it through when she proclaims herself Logan’s fiancé at the hospital, simply because the sexy—albeit grumpy—football player forgot his cell phone at a party and security won’t let her pass. It’s not her fault it was overheard by the worst possible person.

A bargain is struck, and a fake marriage is the perfect solution. But the simple solution creates a whole new problem: they’re not as different as they seem. The reluctant groom has fire inside him, and his impetuous bride is about to light the match.