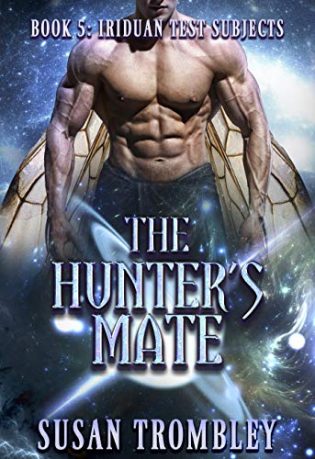 The Hunter's Mate
by Susan Trombley

Still haunted by nightmares about Hunter’s sacrifice to save the lives of her and her friends, the last alien Tarin expects to see on Akrellia is the Menops bounty hunter himself. She’s drawn to the dangerous male, despite his insectoid appearance, but chalks it up to their experiences together, unable to accept it might mean more—even as she decides never to let him out of her sight again.

Hunter has spent his life searching for one thing and one thing only—a cure for imprinting. To that end, he joined the traitorous Iriduan, Halian, in a devil’s bargain that has him deceiving Tarin and her friends, and he’s not comfortable with that deception—or with his growing concerns about Halian’s plans.

When the execution of part of Halian’s plan isolates Hunter and Tarin on an unknown alien world, far from help, Hunter’s problems grow even more complicated. An unanticipated metamorphosis leaves his body completely changed—in a way that makes it impossible to ignore his growing feelings for Tarin.

But secrets, lies, and a past he can’t change form a seemingly insurmountable obstacle between them. Hunter must prove he’s worthy of his queen and earn her forgiveness for his past mistakes, but the consequences of those mistakes have yet to fully manifest—and when they do, no one will be safe.