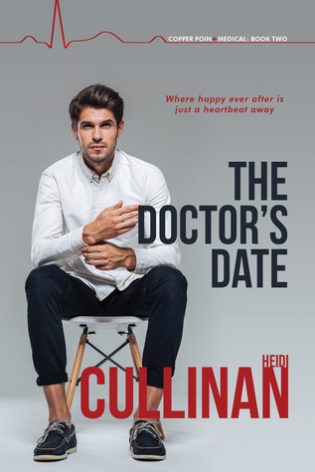 The Doctor's Date
by Heidi Cullinan

The hospital’s least eligible bachelor and its aloof administrator hate each other… so why are they pretending to date?

Dr. Owen Gagnon and HR director Erin Andreas are infamous for their hospital hallway shouting matches. So imagine the town’s surprise when Erin bids an obscene amount of money to win Owen in the hospital bachelor auction—and Owen ups the ante by insisting Erin move in with him.

Copper Point may not know what’s going on, but neither do Erin and Owen. Erin intends his gesture to let Owen know he’s interested. Owen, on the other hand, suspects ulterior motives—that Erin wants a fake relationship as a refuge from his overbearing father.

With Erin suddenly heading a messy internal investigation, Owen wants to step up and be the hero Erin’s never had. Too bad Erin would rather spend his energy trying to rescue Owen from the shadows of a past he doesn’t talk about.

This relationship may be fake, but the feelings aren’t. Still, what Erin and Owen have won’t last unless they put their respective demons to rest. To do that, they’ll have to do more than work together—they’ll have to trust they can heal each other’s hearts.