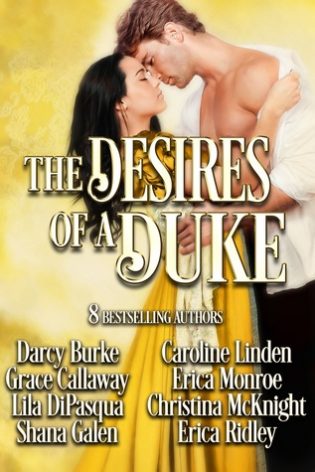 Available for a LIMITED TIME ONLY!

Enjoy eight historical romances from bestselling authors, featuring dashing, roguish dukes who are willing to risk it all to win the lady their heart desires. When these powerful, bold men take a chance on love, nothing can stop them.

THE FORBIDDEN DUKE by Darcy Burke
The Forbidden Duke helps ruined Eleanor find a second chance for happiness. What will she say when she learns of the role he played in her downfall?

THE DUKE WHO KNEW TOO MUCH by Grace Callaway
A spinster and rake join forces to catch a murderer. Wills clash and passion flares; will they risk all for love—before it’s too late?

THE DUKE’S MATCH GIRL by Lila DiPasqua
The only woman Leo, Duke of Mont-Marly, has ever yearned for is the adorably unconventional beauty who got away. Suzanne creates and selling matchsticks, elixirs for the ill…and is still so damned alluring. Leo is determined to give her a Christmas beyond her wildest imagination...

WAITING FOR A DUKE LIKE YOU by Shana Galen
Pursued by assassins, Princess Vivienne of Glynaven escapes to England. The Duke of Wyndover aids her, but is he the man she’s been waiting for?

WHEN I MET MY DUCHESS by Caroline Linden
The Duke of Wessex realizes he’s about to marry the wrong woman when he meets his bride’s sister…and the wedding may become a scandal.

I SPY A DUKE by Erica Monroe
A governess entering into a marriage of convenience with a duke gets more than she bargained for, as he's also a spy for the crown.

THE MISFORTUNE OF LADY LUCIANNA by Christina McKnight
The Duke of Montrose has only one choice: find a wealthy heiress to wed. When his quest brings him to Lady Lucianna, he can’t deny that he wants her for more than just her dowry.

THE DUKE’S ACCIDENTAL WIFE by Erica Ridley
The unflappable Duke of Ravenwood meets his match in this rollicking New York Times best-seller!