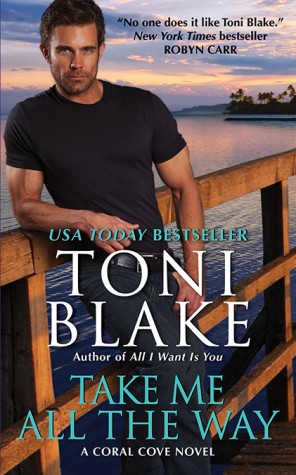 Take Me All the Way
by Toni Blake

You can't go too far when you're fighting for love...Tamra Day swore off men a long time ago. Her art, her friends, and her garden have always been enough . . . until now. Suddenly, Tamra is aching for a connection. Unfortunately, Coral Cove's most eligible bachelor is the troublemaker who's building the mini-golf course she's designing. Brusque and sarcastic, he's made a habit of annoying Tamra. But more infuriating is the fact that Tamra can't help noticing how sexy he is.They call him a war hero, but Jeremy Sheridan knows better. Still haunted by painful memories from Afghanistan, he's just hoping for a fresh start. So far, the only problem is his new boss, Tamra, a control freak who's easy on the eyes—and way too fun to tease.Despite their differences, Tamra and Jeremy aren't as alone as they think they are. And together, with a little Coral Cove magic, they'll discover how good it feels to embrace a bright new future.