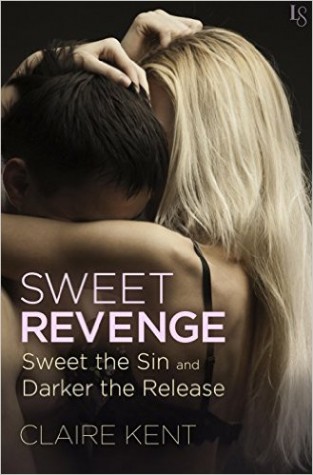 A woman discovers that she’s sleeping with the enemy in a two-novel story of longing, betrayal, and insatiable desire from bestselling author Claire Kent. This ebook bundle includes both Sweet the Sin and Darker the Release, hailed by Library Journal as “hot and steamy, full of complex characters, with a dash of suspense and a surprise thrown in for good measure.”

Portrait artist Kelly Watson keeps her relationships simple and steamy, with no strings attached. She’s had a hard time trusting other people since she was a child, when her father was murdered for trying to blow the whistle on corporate corruption. Nearly twenty years later, Kelly finds herself in the arms of a seductive stranger—the very same man who may have ordered her father’s death. And even as she plays him, using hot sex as a means to revenge, Kelly is tormented by one question: Is she committing the ultimate betrayal?

Caleb Marshall has spent decades forging a high-powered career, rejecting intimacy for the convenience of fast women and cheap thrills. But Kelly intrigues him, pushing commitment buttons he didn’t know he had. Still, something is wrong. Despite their physical and emotional chemistry, Caleb feels the fear inside of her. Now the only way to keep her safe is coming clean, before secrets and lies destroy their connection—no matter how deep, intense, and addictive it may be.

Sweet Revenge is intended for mature audiences. This ebook also includes an excerpt from Claire Kent’s Taking It Off, starring a mouthwatering male stripper who knows what it really means to bare everything.