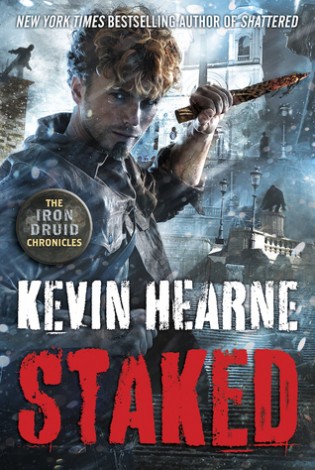 This hilarious and action-packed urban fantasy series is set in a modern world in which all the gods of every pantheon are alive and well, as in American Gods; its hero is a smart-mouthed, buttkicking magician, like Jim Butcher’s Harry Dresden. But it’s told in a smart, witty, unforgettable voice that’s all Kevin Hearne—a star in the fantasy world. This addictive and wildly imaginative series stars hero Atticus O’Sullivan: a handsome, tattooed Irishman who looks like a young rock star, but is in actuality a 2,000-year-old Druid with extraordinary magic powers. In Staked, Atticus has his final confrontation with the clan of vampires who have been bent on destryong him—including Leif, his former best friend and now enemy.