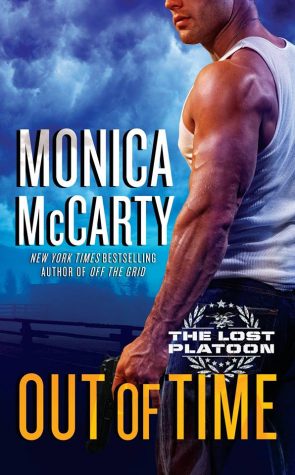 Out of Time
by Monica mcCarty

A hunt for dangerous secrets leads to explosive chemistry in this exhilarating romantic suspense novel from the New York Times bestselling author of Off the Grid.

A team of Navy SEALs goes on a mission and disappears without a trace--they are the Lost Platoon.

With his men scattered to all corners of the globe after a disastrous secret op in Russia, Lieutenant Commander Scott Taylor is trying to find out who was responsible for leaking the information that killed half his platoon. Were it not for Natalie Andersson, the woman he had been secretly dating in the Pentagon who had warned him of the danger, he knows they would all be dead. Scott is devastated when he hears that the woman he loved and hoped to marry has been killed for helping him--until he learns that Natalie was the spy who betrayed them. But when his search to clear his name brings him face-to-face with a very-much-alive Natalie, Scott realizes that justice and vengeance might not be as clear-cut as he thought.

Natalie Andersson, or, as she was born, Natalya Petrova, has put the memories of her early childhood in Russia behind her. She never dreamed that she would be at the center of an elaborate "sleeper" espionage program. Even when she learns the truth, she refuses to spy for the country of her birth, until the Russians threaten the lives of the only family she has ever known. But Natalie is the worst spy in the history of spying, falling for her target. When her attempt at misdirection leads to irreversible consequences, she is forced to run for her life, with her lover hot on her tail.