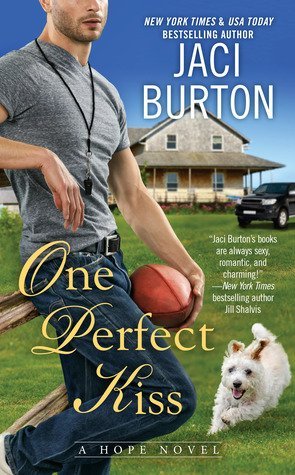 One Perfect Kiss
by Jaci Burton

Josie Barnes has always craved a sense of home. She's found that in Hope, Oklahoma--she bought a house, has a new job as an English teacher at Hope High, she's made wonderful friends, and she's taking in stray animals that no one else wants. Now she's flirting with fellow teacher and hot high school football coach Zach Powers. But he's almost too good to be true, and Josie learned long ago not to trust in the too-good-to-be-true, because it has always let her down.

A former pro football player, Zach had to pull back when a career-ending knee injury forced him to rethink his future. Now he's happy calling plays as Coach. If he could just get Josie Barnes to stop benching his players for their poor grades, life would be perfect. Instead, she drives him crazy as the stern teacher at school and the sexy woman of his dreams outside of the classroom. He knows she's been hurt in the past, but he wants to be that guy she can trust.

The one thing Josie has never been able to count on is the people closest to her. But Zach intends to show her that what they have between them is a textbook case of love.