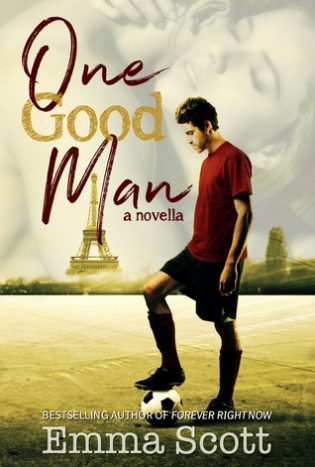 One Good Man
by Emma Scott

It’s spring, 1970. The Vietnam War has been raging for years with no end in sight. Janey Martin, a California college student and aspiring journalist is tired of writing puff pieces about her university men’s sports teams. She wants to be taken seriously as a journalist and as a woman. With riots at their doorstep, her wealthy father sends Janey to the Sorbonne in Paris to finish her college education away from the chaos.

Janey is reluctant to leave the Big Story that is Vietnam, but vows to prove herself. Much to her dismay, her first assignment is to interview the hotshot star forward of a local soccer team. Janey is sure Adrien Rousseau is going to be like every other playboy jock she’s ever dealt with, but quickly learns there is much more to Adrien than meets the eye.

The mysterious, sexy footballer just might be the biggest story of Janey’s life.

First published as part of the Team Player anthology, releasing as a standalone with bonus, extended epilogue, April 19th!