Join our newsletter to be the first to hear our latest news! Learn More
Home / Releases / One-Eyed Royal by Cordelia Kingsbridge 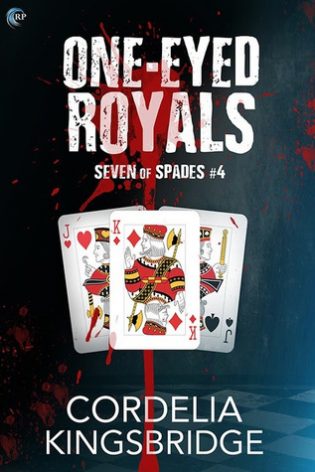 Shattered by their devastating breakup, Detective Levi Abrams and PI Dominic Russo find themselves at war right when they need each other most. While Dominic is trapped in a vicious cycle of addiction, Levi despairs of ever catching the Seven of Spades. The ruthless vigilante’s body count continues to climb, and it’s all Levi can do to keep up with the carnage.

When Levi’s and Dominic’s paths keep crossing in the investigation of a kidnapping ring with a taste for mutilation, it feels like history repeating itself. Thrown together by fate once again, they reluctantly join forces in their hunt for the mastermind behind the abductions.

But the Seven of Spades hates sharing the spotlight, and they have an ace in the hole: a new batch of victims with a special connection to Levi. Their murders send shockwaves through Las Vegas and change the rules of the game forever.

The Seven of Spades has upped the ante. If Levi and Dominic don’t play their cards right, they’ll end up losing everything.