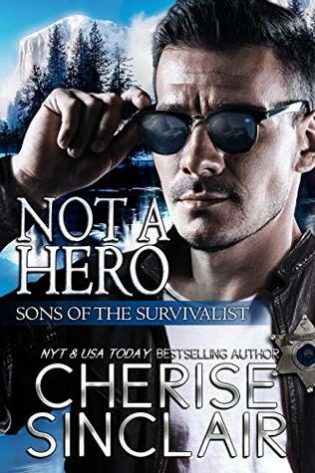 Not a Hero
by Cherise Sinclair

In the Alaska wilderness, four streetwise boys became men—and brothers
Now the crazy ex-military survivalist who plucked Gabriel and three other boys from an abusive foster care home has died. But the sarge leaves them a final mission--to revive the dying town of Rescue.

Gabe is done with being a hero.
Wounded in body and soul, the retired SEAL simply wants to remain holed up in his isolated cabin. He sure doesn’t want to be chief of police in some defunct town. But he has his orders.

Audrey needs a place to hide
After the Chicago librarian discovers a horrendous crime, she wakes to an assassin in her bedroom. Injured and terrified, she flees, covering her trail every inch of the way. New name, new ID. New home. As Audrey learns to survive in Rescue, she begins to fall for the town…and the intimidating chief of police who protects it.

Can the shy introvert and the deadly police chief find a life together?
Despite the discord in town, Gabe is finding his own peace…with the quiet young woman who seems to have no past. She’s adorable and caring and so very lost. But how can he trust someone who lies to him with every breath she takes?