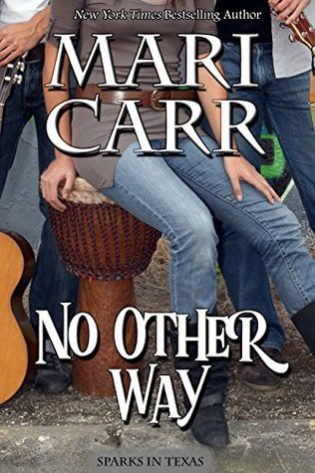 No Other Way
by Mari Carr

Tyson Sparks finds love with the girl of his dreams. And his best friend.

When Harley returns home after a year away, her best friends and bandmates, Caleb and Tyson, are there waiting for her. After all, the men have had twelve long months to worry about Harley's real reason for leaving Maris. Shortly after her brother's death, they made a mistake. One that haunts them and keeps them up all night, tossing and turning--with desire. They kissed her. Together.

Harley left Texas and headed to Florida to mourn her beloved brother, escape her screwed-up parents and to figure out these new feelings she has for Ty and Cal. The three of them grew up together and there was nothing on earth more precious to her than their friendship. So why is she now imagining the three of them doing the horizontal mambo. And what the hell would the guys think if she told them she wanted them both? Would they be willing to throw convention and society's rules to the curb? Or would they force her to choose?

After years spent in limbo, Harley is ready for an adventure. And it includes love, laughter, skinny-dipping, music and the two men who make her heart dance.