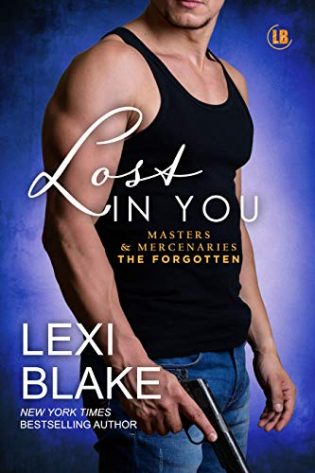 Lost in You
by Lexi Blake

Robert McClellan was forced to serve as a soldier in a war he didn’t understand. Liberated by McKay-Taggart, he struggles every day to reclaim the life he lost and do right by the men he calls his brothers, The Lost Boys. Only one thing is more important – Ariel Adisa. The gorgeous psychologist has plagued his dreams since the day they met. Even as their mission pushes him to his limits, he can’t stop thinking about taking his shot at finding a life beyond all this with her.

Ariel Adisa is a force to be reckoned with. Her performance in Toronto proved she’s more than just a brilliant mind, but Robert still acts as if she is a wilting flower who needs his protection. Joining him on the mission to Munich should be the perfect opportunity to test their skills and cement their relationship. She and Robert are an excellent match. But when a stunning secret from Robert’s past is revealed, their world is turned upside down and nothing will ever be the same again.

While they chase dark secrets across Europe, Robert and Ariel realize that the only thing worse than not knowing who you are could be discovering who you used to be...