Join our newsletter to be the first to hear our latest news! Learn More
Home / Releases / Line Brawl by Bianca Sommerland 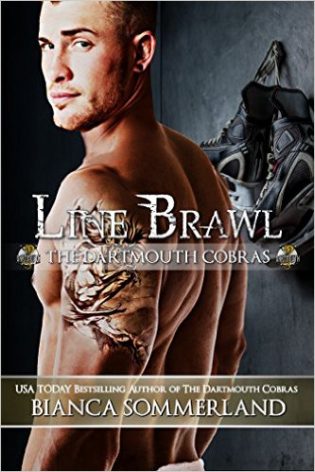 Not all fights are one on one. In a team, no man should stand alone.

Shawn ‘Easy’ Pischlar has given his speech so often, it should be written on the white board in the Dartmouth Cobra’s locker room. Too many of his own teammates have heard the words.

And the games he’s played are finally catching up to him.

To hang on to his freedom, Shawn gave up on ever having someone to call his own. A young woman who expects nothing from him slips into his life and has him ready to toss the rulebook. While the man he loves tempts him to burn it.

Keeping them both would be easy, only…caring about them isn’t.

Because when he lets himself care, he remembers why he wrote the rules in the first place. Every lover, from the casual, to those who steal a piece of his heart, shouldn’t expect more than pleasure. More than passion.

Playing the game, on and off the ice, is his whole world. One he isn’t ready to change.

Except, life doesn’t stop for the game. And when old scars are ripped open, and he’s left bloody and beaten, the rules won’t help him put the pieces of his life back together.

To win this fight, he’ll have to break each and every one.