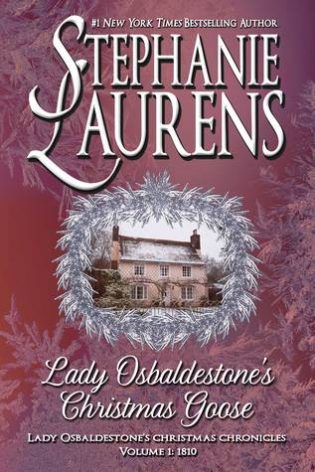 A lighthearted tale of Christmas long ago with a grandmother and three of her grandchildren, one lost soul, a lady driven to distraction, a recalcitrant donkey, and a flock of determined geese.

Three years after being widowed, Therese, Lady Osbaldestone finally settles into her dower property of Hartington Manor in the village of Little Moseley in Hampshire. She is in two minds as to whether life in the small village will generate sufficient interest to keep her amused over the months when she is not in London or visiting friends around the country. But she will see.

It’s December, 1810, and Therese is looking forward to her usual Christmas with her family at Winslow Abbey, her youngest daughter, Celia’s home. But then a carriage rolls up and disgorges Celia’s three oldest children. Their father has contracted mumps, and their mother has sent the three—Jamie, George, and Lottie—to spend this Christmas with their grandmama in Little Moseley.

Therese has never had to manage small children, not even her own. She assumes the children will keep themselves amused, but quickly learns that what amuses three inquisitive, curious, and confident youngsters isn’t compatible with village peace. Just when it seems she will have to set her mind to inventing something, she and the children learn that with only twelve days to go before Christmas, the village flock of geese has vanished.

Every household in the village is now missing the centerpiece of their Christmas feast. But how could an entire flock go missing without the slightest trace? The children are as mystified and as curious as Therese—and she seizes on the mystery as the perfect distraction for the three children as well as herself.

But while searching for the geese, she and her three helpers stumble on two locals who, it is clear, are in dire need of assistance in sorting out their lives. Never one to shy from a little matchmaking, Therese undertakes to guide Miss Eugenia Fitzgibbon into the arms of the determinedly reclusive Lord Longfellow. To her considerable surprise, she discovers that her grandchildren have inherited skills and talents from both her late husband as well as herself. And with all the customary village events held in the lead up to Christmas, she and her three helpers have opportunities galore in which to subtly nudge and steer.

Yet while their matchmaking appears to be succeeding, neither they nor anyone else have found so much as a feather from the village’s geese. Larceny is ruled out; a flock of that size could not have been taken from the area without someone noticing. So where could the birds be? And with the days passing and Christmas inexorably approaching, will they find the blasted birds in time?