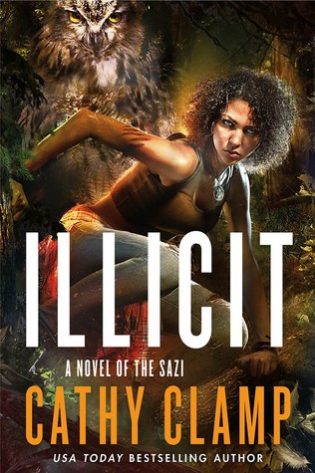 In Cathy Clamp's Illicit, when a border dispute between two bear clans destabilizes shapeshifter relations throughout Europe and threatens to reveal their existence to humans, the Sazi High Council orders both sides to the negotiation table. The peace talks take place in Luna Lake, the American community where all shifter species--wolf, cat, bird, bear, and more--live in harmony.

Diplomats, their families, and security personnel stream into town, among them Dalvin Adway, a Wolven agent. Dalvin is startled to find Rachel Washington in Luna Lake. The last time he saw her, they were children in Detroit. Then she was kidnapped and, he thought, murdered. But Rachel became an owl-shifter as a result of the attack and has avoided family and old friends ever since, knowing they would not understand her . She's stunned to see Dalvin and learn that he, too, is an owl-shifter.

Their wary friendship is on the brink of becoming something more when conspiracy and betrayal cause the peace talks to break down. The fight between the bear clans will be settled through a form of traditional challenge--a risky tactic that might lead to full-blown war. Rachel is determined to prevent that, even if it means taking up the challenge herself!