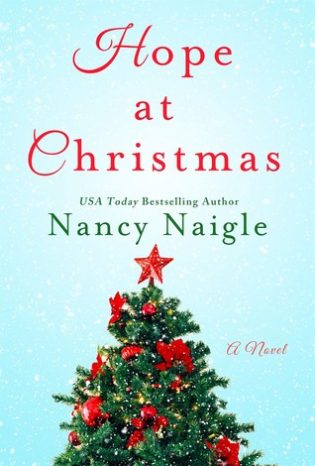 Hope at Christmas
by Nancy Naigle

A recently divorced woman and her daughter look for a fresh start by moving to a small town that embraces them in ways that only fate and the magic of Christmas can explain.

Sydney Ragsdale is divorced, but her husband is still calling the shots. In an attempt to shake free from his hold, she and her daughter, Ray Anne, head for tiny Hopewell, NC to the only asset her ex has no control over – a decaying farmhouse that once belonged to her grandparents. She finds solace at The Book Bea, the bookstore she’d loved as a child during her summer stays.

Kevin MacAlea, Mac to his friends, is the local high school history teacher and baseball coach. Father of a twelve-year-old son, he’s Hopewell, North Carolina’s most sought after bachelor. His young bride abandoned him and his son just before Christmas and has never come back. It has left his son bitter about Christmas which is hard for Mac who loves the magic of the season. He’s been the Santa here in Hopewell since the year Seth was born.
But when a catastrophe forces The Book Bea to close before the end of the year, everyone in the small town is feeling the loss. While Sydney is already off-balance by the bad news, her ex-husband breaks a promise to their daughter that sends Ray Anne running away. As Sydney tries to figure out what her next steps are she discovers all of the answers are right here in Hopewell.