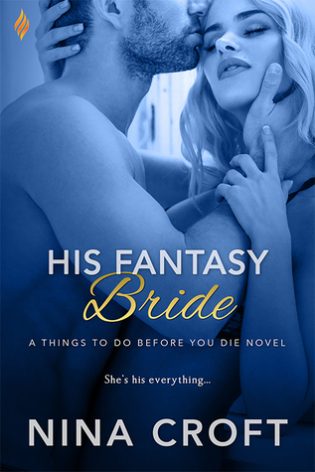 His Fantasy Bride
by Nina Croft

Released: July 11th 2016
Genre: Contemporary Romance
Series: Things to do Before you Die #1

I can’t marry you. You don’t love me.

Two sentences, that’s all Gabrielle Harper left Vito D’Ascensio when she vanished the night before their wedding. If he wants his bride back, he’s going to have to hunt her down and prove his love. But when he searches for Gabrielle, he finds Gabby instead; it seems his perfect bride is nothing but a fantasy.

After six months, Gabby presumes it’s over, an episode in her life she’s totally ashamed of. But now Vito is back. He’s the one man she can never have, but as desire explodes between them, she has a tough time remembering why they shouldn’t be together. Oh, right, her family hates him, and he’s done terrible things. Or has he? But it doesn’t matter. When he finds out the truth about who she really is…he’ll never want to see her again.