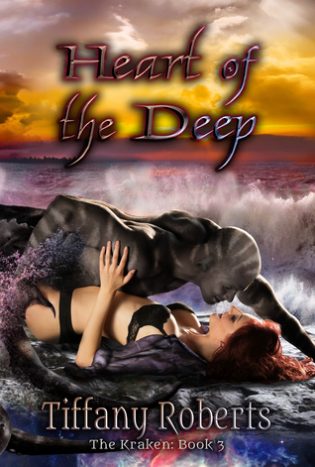 Heart of the Deep
by Tiffany Roberts

HIS HUNTRESS AND HIS HEART

Larkin has spent almost a year hunting the monstrous kraken in the hope that they knew the whereabouts of her missing brother. Her efforts finally come to fruition when she and the other rangers capture three of the beasts — but the reality is nothing like the stories they’ve been told, and the kraken are not the monsters she expected. Dracchus awes her, captivates her, and makes her long for things she’d never dared dream. With tensions between their people escalating, can she jeopardize everything by trusting him? Is a taste of him worth her life?

HER WARRIOR AND HER REFUGE

Dracchus has risked himself countless times for the sake of his people, doing anything and everything to protect and provide for them. Between the vocal, anti-human kraken at home and the hunters prowling the seas, everything is falling apart around him. But when he meets Larkin, he allows himself hope — hope for a mate of his own, for a family of his own. She is his match, unlike any female he’s ever known. To have her, he’ll have to endanger her, along with all those he’s come to care for. After years of selflessness, how much is he willing to gamble to fulfill his own desires?