Join our newsletter to be the first to hear our latest news! Learn More
Home / Releases / Hard Truths by Alex Whitehall 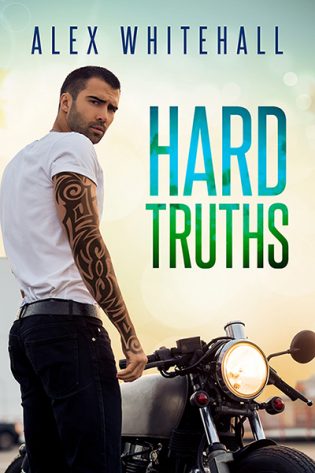 He can't have the family he wants, but he may get the love he deserves.

Isaac didn’t expect to find love at his family’s Christmas dinner, but that was before he met his sister’s new fake boyfriend. Tall, muscular, and tattooed, Logan is what Isaac would love in a partner—and also everything his parents would hate in one. Not that they know Isaac’s gay.

That doesn’t stop him from dating Logan—unbeknownst to his parents, and with his sister’s approval after she fake dumps him. The pair dive into a whirlwind romance of motorcycle rides, cheesy puns, and hot sex. They meet each other’s friends and fill their time with happiness and laughter. It’s all perfect.

Until Isaac suggests they move in together, and Logan asks Isaac to come out to his parents. Isaac wants to, but he’s scared; he doesn’t want to lose his family. Unfortunately, he can’t see that his real family has been right beside him all along.