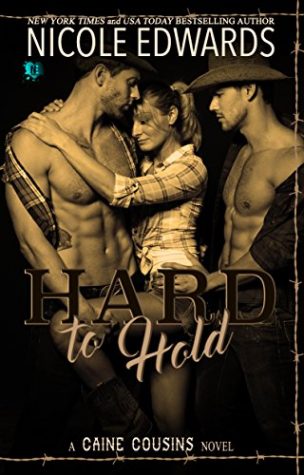 Hard to Hold
by Nicole Edwards

Released: May 30 2017
Series: Caine Cousins #1
Published by Self Published

Wolfe Caine and his cousin Lynx know the small town of Embers Ridge like the backs of their hands. They grew up here, started more than their fair share of trouble on these back roads. They’ve been called wild, untamable, even crazy at times. And they’re okay with that.

Settling down has never been in Wolfe’s plan, but that was before they caught his eye. As far as Wolfe’s concerned, the two of them together … that’s his greatest temptation.

Getting close to either of them is difficult. But when Wolfe gets them both in his grasp, he’s determined he’s going to hold on, no matter how hard that proves to be.