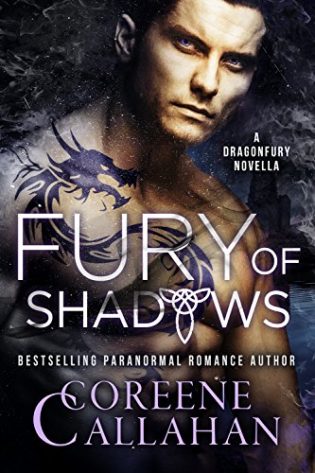 Fury of Shadows
by Coreene Callahan

In the second novella of Coreene Callahan’s bestselling Dragonfury Series, a dragon warrior cursed by a terrible past finds redemption in the arms of the woman he's fated to protect.

Commander of the Scottish pack, dragon warrior Cyprus harbors a terrible secret. A brutal truth he has long kept hidden. But when a powerful foe resurfaces, he steps from the shadows and returns to the hunt, vowing to protect his pack along with the woman his enemy seeks to use against him.

Brilliant, broke, and stranded in a foreign country, book conservator Jillian Wayburn works two jobs, struggling to make ends meet. When she lands the middle of a secret war, she becomes the target of a rogue pack of Dragonkind and the unwitting guest of a warrior who refuses to let her go—and despite the danger, makes her want to stay.

With the war raging, Cyprus is forced to face his demons. But will defeating them be enough? Or will the past win out, taking him him from the only woman he will ever love?