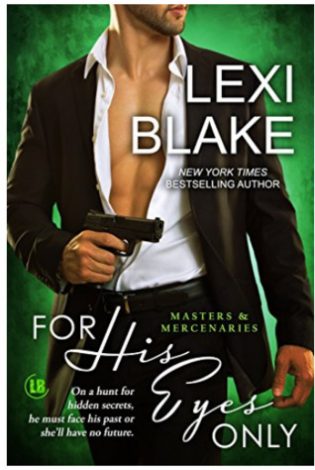 For His Eyes Only
by Lexi Blake

A night he can’t forget

Five years ago, Nick Markovic found himself consumed by his quest for vengeance. The one time he managed to find peace was in the arms of Hayley Dalton. Being with her was like bathing in sunlight, and he ached to feel that again, but he couldn’t. He gave his oath to Hayley’s cousin Desiree, his partner at McKay-Taggart and Knight, that he’d never let his darkness infect Hayley’s innocent world.

A spark she can’t put out

It was years before that Hayley offered everything she had to Nick. After that one amazing night, all she wanted was to be his forever. Unfortunately, Nick’s reaction was to walk away from her and never look back. The warm and caring man she’d discovered was gone, and after Des’s death, he’d only grown colder. But when Hayley finds herself in mortal danger, she’s forced to seek protection from the man who broke her heart.

A flame that threatens to consume them both

Haunted by the women he failed, Nick can’t allow himself to grow close to Hayley again. Running to stay ahead of the powerful forces that endanger their lives, they travel from the lush Garden in London to the glittering lights of Rio. As the threat against her becomes clearer, he realizes that to keep her safe he must confront the demons from his past, even if it costs him a future with the woman he loves.