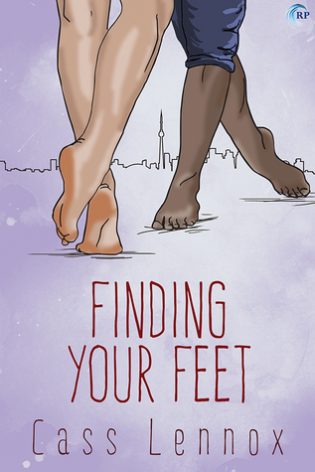 Finding Your Feet
by Cass Lennox

While on holiday in Toronto, Evie Whitmore planned to sightsee and meet other asexuals, not audition for a dance competition. Now she’s representing Toronto’s newest queer dance studio, despite never having danced before. Not only does she have to spend hours learning her routine, she has to do it with one of the grumpiest men she’s ever met. Tyler turns out to be more than a dedicated dancer, though—he might be the kind of man who can sweep her off her feet, literally and figuratively.

Tyler Davis has spent the last year recovering from an emotionally abusive relationship. So he doesn’t need to be pushed into a rushed routine for a dumb competition. Ticking major representation boxes for being trans and biracial isn’t why he went into dance. But Evie turns out to be a dream student. In fact, she helps him remember just how good partnering can be, in all senses of the word. Teaching her the routine, however, raises ghosts for him, ones he’s not sure he can handle.

Plans change, and people change with them. Learning a few steps is one thing; learning to trust again is another entirely.