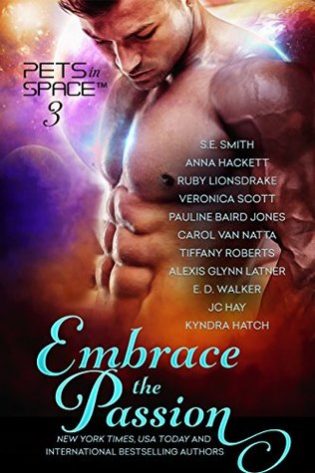 HEART OF THE CAT
Sarafin Warriors Series
By S.E. Smith
Can love bridge the gap between a wounded alien warrior and the reclusive human woman who holds the future of his species inside her?

DESERT HUNTER
Galactic Gladiators Series
By Anna Hackett
Among the desert sands of an alien world, a man with secrets to hide finds himself face to face with the one woman who can bring him to his knees.

QUASHI
Mandrake Company Series
By Ruby Lionsdrake
Alien fur balls, a handsome doctor, and a little white lie create havoc for a young woman who only wanted a job. STAR CRUISE: MYSTERY DANCER
The Sectors SF Romance Series
By Veronica Scott
A long-lost princess and her three-eyed cat seek refuge on the Nebula Zephyr only to catch the attention of an inquisitive Security Officer.

OPERATION ARK
Project Enterprise Series
By Pauline Baird Jones
A not quite routine mission to return rescued prisoners to their home worlds turns deadly for unlikely allies, a USMC Sergeant and a raised-by-robots pirate. Is the Sergeant’s unusual pet the wild card that will save or doom them?

CATS OF WAR
A Central Galactic Concordance Novella
by Carol Van Natta
A disgraced military Sub-Captain, a repair technician with secrets, and two special cats must save the day when trouble erupts at an important factory.

HUNTER OF THE TIDE
The Kraken #3
By Tiffany Roberts
Nearly broke by betrayal, a human discovers solace—and a chance for love—among the creatures he once hunted, but he must overcome prejudice and inhibition to claim the female he desires.

STARWAY
By Alexis Glynn Latner
A lonely interstellar pilot and a passenger’s mistreated consort find each other in an interstellar hotel that offers everything to satisfy its guests’ desires—even desires they didn’t know they had.

THE BAJO CATS OF ANTEROS XII
By E D Walker
Two ex-lovers, stranded in space, have to save a pair of kittens with hazardous powers before the local drug cartel catches up to them.

SHADOW OF THE PAST
By JC Hay
On a world of perpetual night, an aging ranger and a widowed veterinarian need to put aside their past to protect a pack of wolves... and their future.

AFTER THE FALL
By Kyndra Hatch
The Invaders took everything worth living for. Could an Invader show him how to live again?