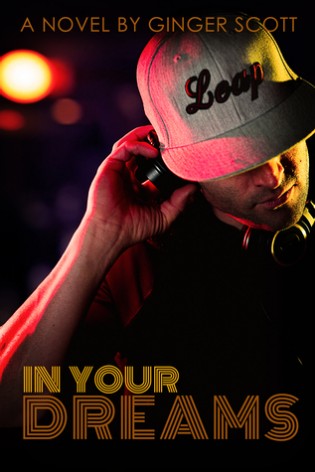 In Your Dreams
by Ginger Scott

Casey Coffield has a growing list of personal flaws he keeps locked away in his head:
He’s never on time.
His list of IOUs to his best friend is endless.
Money is always short.
Goals are never in reach.

Oh, and he’s decided to add college drop-out to that list, too. He doesn’t really think that last one’s such a bad thing, but his family insists it is, so it stays on the list.

On paper, he’s a zero. But in person, when he’s mixing tracks for a sea of bodies at the hottest clubs and parties, he’s downright irresistible. Just-right stubble on his chin, body of a boxer and a smirk that stimulates all the right nerves—women have never been a problem. They flock to his swagger and fall for his charm…fast.

All except for this one.

Purple hair, gray eyes, a raspy voice and sass, Murphy Sullivan is a little bit country and a little bit rock-n-roll. And her and Casey? They have history. He can’t remember it, but she wrote a song about him—and it’s not exactly a love song. But it is good. Damn good. And uncovering her inspiration just might be the key to solving a few of his shortcomings—not to mention open doors to his own big break in the music industry.

But sometimes dreams get messy when they collide. Sometimes life changes patterns. A past paints the wrong picture and futures get cloudy. The only question that remains is who will you choose when the dust settles—you? Or the girl of your dreams?