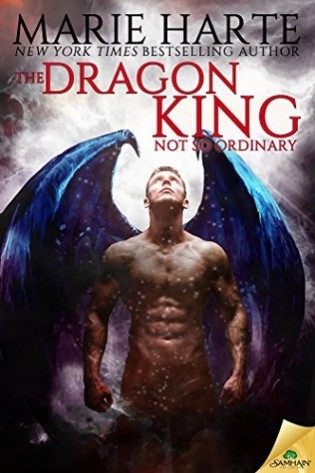 The Dragon King
by Marie Harte

What good is being king if you can’t burn your own rules?

In the two years since Jentaron hatched, he’s grown into an adult blue dragon full of the knowledge of his royal predecessors. He’s a true king, even if the other denizens of the Ethereal, those demons, havoc, angels and the like, continue to test him.

But he’s got heavier worries. Namely, an unspeakable danger that threatens all life as the planet knows it. He can feel it, can sense that he’s got a bigger role to play than just pissing off the Ethereal.

With the blood elves and havoc making more trouble than usual, magic no longer flowing freely in the Abyss, and angels massacring everything demonic they can get their holy hands on, the Balance has reached a tipping point. Time to take charge before the rules change.

What’s a dragon to do but create his own chaos? He’ll take a mate or two, instill fear where needed, and finally return dragonkind to the Ordinary—the human lands—where a dragon will decide the fate of the worlds.

Because he’s king, and he says so.

Warning: Contains a dragon king challenged by a devious demon and an alluring, not-so-human human. Expect carnal hunger only a king can satisfy, and heat only a dragon can generate.