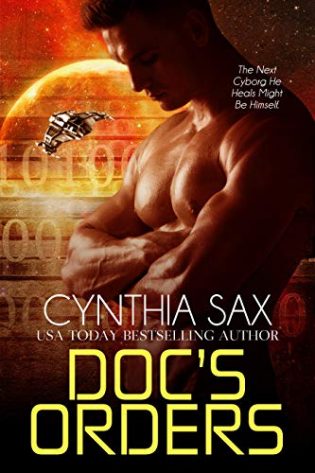 She wants both sides of her cyborg—the medic AND the beast.
***
A fully functional cyborg is balanced. His machine half and his organic half work together to produce the perfect warrior.

The G Model operates at the two extremes. When his machine is in complete control, he’s the logic-driven medic, saving lifespans. Once his organics take charge, he becomes the savage beast…and beings die.

Both sides of Doc want to be the first to claim his female.

Allinen is one of the few beings in her small settlement who wasn’t born with a fated mate. Determined to belong somewhere, she has crafted a plan to leave the planet.

That plan doesn’t involve a huge stormy-eyed male who alternates between cool seduction and out-of-control ravishment. Doc isn’t her fated mate. Allinen knows that. But his dual nature and forbidden embraces tempt her to forget forever and indulge in more immediate delights.

Neither side of Doc views their relationship as being temporary. Her conflicted cyborg is prepared to battle her family, her planet and death itself to keep her.