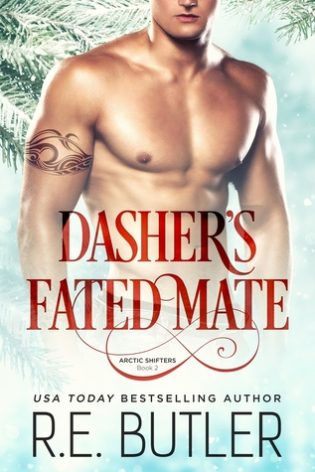 When Mrs. Claus sneaks away from the North Pole on Christmas Eve, Santa sends out a security team to bring her home before dawn on Christmas Day. The team follows the tracking beacon in Mrs. Claus’s coat to downtown New York City, finding her in the crowded streets of the human city. They hustle her into an alley and use magic to take her home to North Pole City.

Merri Blevins has had a rough night. Not only was her adorable elf costume unavailable at the costume store, forcing her to take a Mrs. Claus costume, but she’s late for a Christmas Eve party in New York City. It’s cold, it’s crowded, it’s late, and a crazy woman dressed just like Merri bumped into her and nearly knocked her over. Could things get any worse?

When Rhys is called by the security team to his bedroom after the Christmas Eve run because of a problem with Mrs. Claus, he realizes immediately that the woman wearing the traditional red dress is not Mrs. Claus, but his Fated Mate. She’s human. She’s pissed. And he has to take her back to her human world before dawn or she’ll be trapped in North Pole City for a year.

Can Rhys convince her to give him a chance to prove his worth as a mate, or will Merri demand she be taken home immediately? Only Santa knows what the future will bring.