Join our newsletter to be the first to hear our latest news! Learn More
Home / Releases / Cuffed by His Charm by Stacey Kennedy 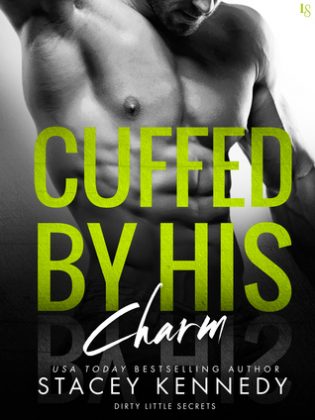 Cuffed by His Charm
by Stacey Kennedy

A tabloid scandal unites a powerful mogul and a woman from the wrong side of the tracks in this tantalizing novel from the USA Today bestselling author of Bound Beneath His Pain and the Club Sin series.

The multimillionaire owner of a chain of successful Irish pubs, Gabe O’Keefe loves being in the spotlight almost as much as he loves women. But when all his secrets are exposed in a shameless tabloid, his glistening reputation takes a hit. What hurts most is learning who sold him out: sweet and sensual McKenna Archer, his own employee. Gabe thought he could trust her. But now he’s got bigger problems than keeping his hands off McKenna.

After putting a difficult past behind her, McKenna would never betray Gabe. But she knows someone who would: her brother, a compulsive gambler who owes money all over town. To make things right, McKenna will have to set aside her feelings for her boss. Easier said than done. Gabe oozes pure temptation. But when they team up, McKenna sees that he isn’t the manwhore she always thought. He’s strong. He’s real. And the heat between them is the only thing that makes sense anymore.