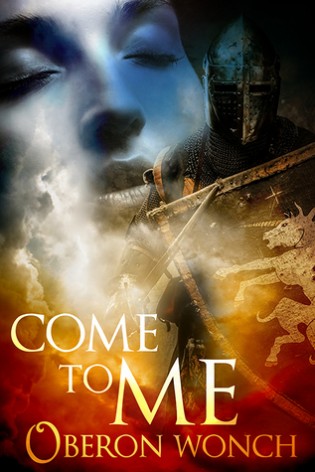 Come to Me
by Oberon Wonch

Comte Grégoire FitzHenri, the new Earl of Shyleburgh, is known for his prowess as one of the Norman Conquerer’s most favored warriors...but not for his romantic sensibility or his command of the English language. Grégoire looks forward to his imminent marriage with his seneschal’s beautiful daughter, his longtime betrothed. But as a rough-hewn soldier, he wishes to enchant the elegant lady before taking their wedding vows—which means an interpreter...and much-needed lessons in courtly love.

The clever Bridget of Shyleburgh has been secretly in love with Grégoire since his visit as a dashing young warrior—when he was promised in marriage to her sister. But when he returns five years later as their new earl, Bridget is tasked with translating for him—including his love letters and somewhat awkward attempts to woo her sister. Mortified at first, Bridget soon finds herself completely charmed by his whispers of love and desire. She never expected such tenderness...or such wicked temptation... from a man like him. Grégoire’s heated missives tempt a fair maiden to stray down a path filled with forbidden pleasures.

But his words are meant for another…aren’t they?