Join our newsletter to be the first to hear our latest news! Learn More
Home / Releases / Chasing Bliss by Lexi Blake 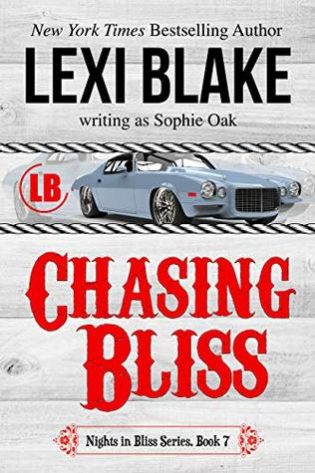 Gemma Wells came to Bliss, Colorado, after a scandal cost her everything. Utterly lost, the disgraced attorney built walls so high that she thinks no one can get through them. She’s given up on love, friendship, and all matters of the heart.

Jesse McCann and Cade Sinclair have floated through life, enjoying the world around them, but never allowing themselves to become a part of it. One look at the pretty attorney and Jesse realizes he’s finally found a reason to stay put. Cade isn’t so sure. He’s crazy about her, but he also knows he doesn’t deserve her.

As they begin to find their way together, a dark secret from Gemma’s past threatens to wreck their futures. Her ex-fiancé is back, bringing danger with him, and their time is running out. Jesse and Cade have to melt this Ice Queen’s heart, or she might not leave Bliss alive.