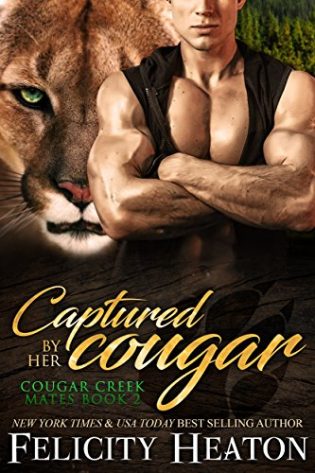 Captured by Her Cougar
by Felicity Heaton

In the wake of an Archangel attack on Cougar Creek, Storm is seething with a need for revenge against the hunter organisation and the key to it might be the petite blonde mortal he’s locked in his cabin, one he’s determined to make sing for him. Only the beauty has a fiery temperament to match his own, and the more time he spends with her, the more she stokes a fire inside him. One that fills him with a startling and undeniable need to make her sing in another way—in his arms.

Gabriella isn’t going to take her captivity lying down. She’s going to give the pig-headed brute holding her against her will hell until he finally believes she’s innocent. He might be a cougar shifter, but she isn’t afraid of him. Or at least she isn’t afraid of what he is. The way he affects her, the flames that lick through her whenever they’re close, terrifies her though, because the longer she’s around the towering sexy-as-sin shifter, the hotter that fire blazes, and it’s only a matter of time before it burns away all her restraint.

With the mating heat and the attack bringing cougars back to the creek, Gabriella is a complication Storm doesn’t need, but she’s one that he wants… because she might just be his one true mate.