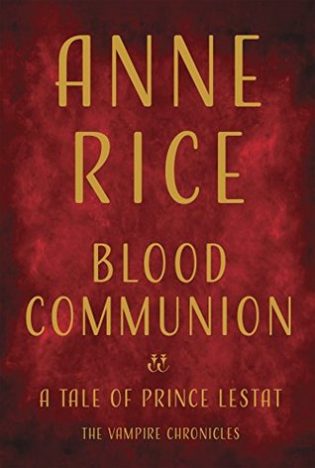 Blood Communion: A Tale of Prince Lestat
by Anne Rice

The Vampire Chronicles continue with a riveting, rich saga--part adventure, part fairy-tale--of Prince Lestat and the story of the Blood Communion as he tells the tale of his coming to rule the vampire world and the eternal struggle to find belonging, a place in the universe for the undead, and how, against his will, he must battle the menacing, seemingly unstoppable force determined to thwart his vision and destroy the entire vampire netherworld.

In this spellbinding novel, Lestat, rebel outlaw, addresses the tribe of vampires, directly, intimately, passionately, and tells the riveting story of the formation of the Blood Communion and how he became Prince of the vampire world, the true ruler of this vast force, and how his vision for all the Children of the Universe to thrive as one, came to be.

The tale spills from Lestat's heart, as he speaks first of his new existence as reigning monarch--and then of his fierce battle of wits and words with the mysterious Rhoshamandes, proud Child of the Millennia, reviled outcast for his senseless slaughter of the legendary ancient vampire Maharet, forever wise and loving and twin to Mekare the Keeper of the Sacred Core; Rhoshamandes, a force who refuses to live in harmony at the Court of Prince Lestat and threatens all that Lestat has dreamt of.

As the tale unfolds, Lestat takes us from the towers and battlements of his ancestral castle in the snow-covered mountains of France to the verdant wilds of lush Louisiana with its lingering fragrances of magnolias and night jasmine; from the far reaches of the Pacific's untouched islands to the 18th-century city of St. Petersburg and the court of the Empress Catherine . . .