Join our newsletter to be the first to hear our latest news! Learn More
Home / Releases / An Exquisite Marriage by Darcie Wilde 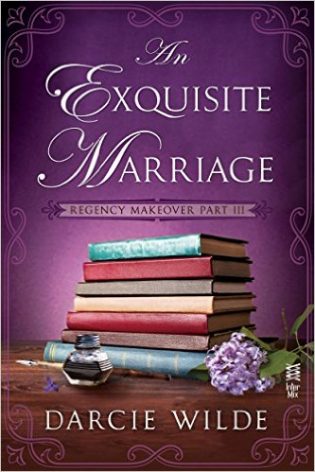 An Exquisite Marriage
by Darcie Wilde

Everyone knows Helene Fitzgerald will never marry. She and her wallflower friends may be on the rise socially, but Helene is still nothing but a sharp-tongued bluestocking who very publically renounced her only marriage offer. Worse, her family is in serious financial trouble. So, how is Helene suddenly attracting the eye of Marcus Endicott, the Duke of Windford and one of England's most eligible aristocrats?

Trapped by his father's long legacy of mistakes, Marcus never thought he'd find a woman he'd want enough to risk his heart. But what began as a contentious friendship has transformed into a passion beyond anything he dreamed possible. Now, Marcus’s old secrets are threatening to destroy everything Helene and her friends have worked for. Can any passion be strong enough to carry Helene and Marcus away from their pasts?