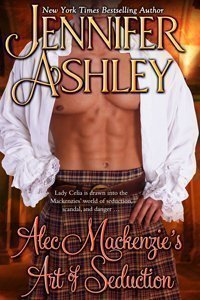 Alec Mackenzie earns a living in exile as an art instructor, a cover for his search of several countries for his missing brother. Lady Celia, an Englishwoman who refuses to marry gentlemen her martinet mother chooses for her, is sent to Alec, the mysterious Scottish recluse, for drawing lessons–her family commands her to learn a skill if she’s put herself off the marriage mart. Alec decides that the courageous Celia needs to expand her talents in painting the human figure, especially that of the male …

Celia is intrigued by the man who pretends his name is Mr. Finn. He’s a Scotsman, she deduces, but he can’t be one of the Highlanders who rose against the king, else she’d be allowed nowhere near him, and he’d be under arrest or already dead.

But as Celia lets her curiosity guide her, she uncovers more about Alec, including his name, his title, and the fact that he was indeed one of the Highlanders at Culloden. She sees the loneliness in Alec, his terrible sense of loss, his tenderness toward his daughter, and realizes he’s a complex man trying to survive now that his home has been destroyed. She also wonders why he’s left the safety of France to come to England, and the learns that he believes she’s the key to finding his missing brother.

But Celia unravels too many secrets, which put not only her life and Alec’s but also her heart in grave danger.

Note: Alec Mackenzie is the brother of Malcolm from The Stolen Mackenzie Bride. He is an ancestor of the Mackenzie family whose story begins with The Madness of Lord Ian Mackenzie.