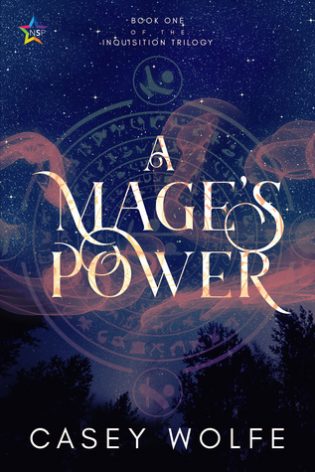 A Mage's Power
by Casey Wolfe

Built on the bones of an ancient city, modern-day Everstrand is where master mage, Rowan, has set up his enchantment shop. When not hanging out with his werewolf best friend, Caleb, or studying, he dabbles in herbology and the controversial practice of blood magic. A prodigy who has already earned two masters, Rowan’s bound and determined to reach the distinction of grandmaster, a mage who obtains a masters in all five Schools of Magic.

Shaw works for the Inquisition, the organization charged with policing the magical races collectively known as magicae. Recently, it has come under scrutiny as magicae begin to disappear and reports of violence increase. With secrets of his own on the line, Shaw is willing to risk everything to find out just what is going on behind all the locked doors.

When Rowan and Shaw are entangled in each other’s worlds, it becomes evident that their hearts are as much at risk as their lives. They must find the truth and stop a conspiracy before it’s too late.