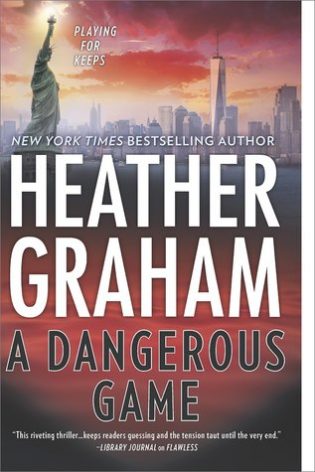 A Dangerous Game
by Heather Graham

Psychologist Kieran Finnegan is thrust into the middle of an investigation into human trafficking when a desperate woman shoves an infant into her arms and then flees...only to be murdered minutes later on a busy Manhattan street. Despite the fact that it isn't an FBI case, Special Agent Craig Frasier starts poking around, because Kieran can't stop thinking about the child and the victim. Their one lead comes through the pub, Finnegan's on Broadway. One of the waitresses also volunteers at a church outreach center, and had been in contact with a distraught young pregnant woman, whom she recommended Kieran to as someone who might be able to help her. When Kieran goes to the outreach center to do some off-the-books investigating of her own, she is approached by two women who are worried for their missing friend, and who reveal that they were part of a human trafficking ring that did business in babies. As Craig and Kieran delve deeper into the underbelly of NYC trying to find out more, the dangerous elements of the ring come to the surface, hoping to silence Kieran before she exposes them.