Join our newsletter to be the first to hear our latest news! Learn More
Home / Releases / A Chip and a Chair by Cordelia Kingsbridge 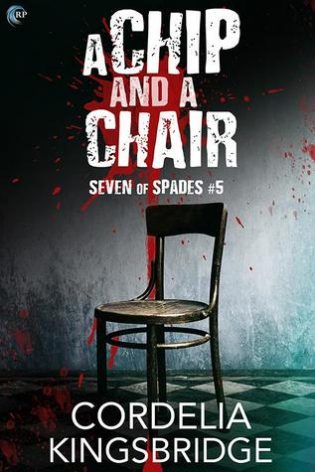 A Chip and a Chair
by Cordelia Kingsbridge

Detective Levi Abrams and PI Dominic Russo are reunited and more committed to each other than ever, but they can’t truly move forward with their lives until the serial killer who’s been tormenting them is behind bars. When a secret burial site is discovered in the desert with the remains of the Seven of Spades’s earliest victims, that goal finally seems within reach.

But just as the net is tightening, the Neo-Nazi militia Utopia launches their master plan with a devastating act of terror that changes the landscape of Las Vegas forever. As Levi and Dominic scramble to prevent the city’s destruction, they’re opposed by treacherous forces that propel them toward catastrophe. In the end, Levi’s fate may rest in the hands of the very killer he’s been hunting.

The race to save Sin City is on, and these players are going for broke. No matter how hopeless things seem, as long as they’re together and they’ve got a chip to play and a chair to sit in, they’re still in the game.