You can see a lot more of our most anticipated books

I fear I’ve made a mistake.

I left a pampered life and a loveless relationship to live on an icy, primeval world, all for the promise of a soulmate and children. But three years have passed, and my hopes and dreams have become dashed. I haven’t resonated. Without resonance, there will be no children for me, and no loving mate.

So I keep waiting, and waiting…

But then I come up with a brilliant plan to get me everything I want. And my plan needs a volunteer, one that would be happy to be my mate in all ways. Luckily, I know just who to approach…

It was supposed to be a relaxing vacation in sweet, sunny Cape Cod—just me and my beloved brother—but discovering a corpse in our rental house really throws a wrench into our tanning schedule. Now a rude, crude bounty hunter has arrived on the back of his motorcycle to catch the killer and refuses to believe I can be helpful, despite countless hours of true crime podcast listening. Not to mention a fulfilling teaching career of wrangling second graders.

A brash bounty hunter and an energetic elementary schoolteacher: the murder-solving team no one asked for, but thanks to these pesky attempts on my life, we’re stuck together, come hell or high tide.

I’m just here to do a job, not babysit an amateur sleuth. Although…it is becoming less and less of a hardship to have her around. Sure, she’s stubborn, distracting and can’t stay out of harm’s way. She’s also brave and beautiful and reminds me of the home I left behind three years ago. In other words, the painful hunger and protectiveness she is waking up in me is a threat to my peace of mind. Before I sink any deeper into this dangerous attraction, I need to solve this murder and get back on the road. But will fate take her from me before I realize the road has been leading to her all along?

The Seduction of Lord Sin

The lady’s intent is seduction. And he doesn’t mind being seduced. . . .

Widowed Charlotte Dexter, Lady Clayton, married for duty as all good ladies are taught to do. Love is for the poets, not for the peerage. Now, with her elderly husband dead, it’s time to marry again. Charlotte wants—needs—children. Given she’s no longer a blossoming flower, her pool of likely husbands is growing ever smaller. She studies the current batch of ton bachelors, those she knows are desperate for a wealthy wife, and decides to hold a party at her estate. The catch? This party is for men only, and at week’s end, one of her guests will be her fiancé.

Marcus Roberts, Duke of Sinclair, is all about duty suddenly finding himself the last of his male lineage. He agrees to accompany his friend to Lady Charlotte’s house party because finding a bride is imperative. Preferably a widow with children. His wife’s death in the arms of his brother destroyed his faith in love—he’ll marry for convenience only—he won’t trust so easily again. All he needs is a bride who he is sure can give him sons. Imagine his shock at learning the only woman at the house party is a widow who is rumoured to be barren. He should leave but as he gets to know Charlotte, suddenly the idea of any of these men marrying her stirs the jealous beast.

The Booktok hit: The Plated Prisoner Series continues in book 4. This dark adult fantasy romance is inspired by the myth of King Midas and the gold-touched woman who realizes her true worth.

“I was nothing but a road to Midas. A means to get to where he wanted to go, and I paved that path in gold.”

My life has been made up of gilded lies. But death has been shaped from rot.

Like a phoenix caught fire, I will need to rise from the ashes and learn to wield my own power. Because my wings may have been clipped, but I am not in a cage, and I’m finally free to fly from the frozen kingdoms I’ve been kept in.

Yet the world doesn’t want to let me.

That’s the thing when you turn against a king—everyone else turns against you.

Good thing I have a different king in my corner.

But even with the dark threat of Slade Ravinger, the other monarchs are coming for me.

So I will fight for him and he will kill for me, and if we need to become the villains, then so be it.

Because so long as I live in this world, I won’t be used again.

Please note: This is an adult fantasy series with dark elements that may be triggering, including past emotional and physical trauma, violence, adult language, and explicit romance. Read at your own discretion.

Kingdoms of Shadow and Ash

Action-packed from the start, with twists, intrigue, and dangerous politics, Kingdoms of Shadow and Ash is a sexy new fantasy series perfect for fans of Jennifer L. Armentrout, Sarah J. Maas, and Danielle L. Jensen.

Legend states that when a ruler worthy of the name reunites the five great kingdoms, the dragons will return. Fyia has done just that, and she wants her dragons. But the dragon eggs are missing, her five war-ravaged kingdoms are unhappy bedfellows, and calls for her to marry grow ever louder.

Fyia hasn’t fought so hard to hand her spoils to another, and her quest to find the missing eggs leads her to the powerful, reclusive king of the Dark Hoods. A formidable man whose magical abilities match her own, as does his stubbornness.

When he refuses to help, she must find a way to make him, even if that means risking the frozen wilds with the infuriating King … even if it means risking the one thing she swore she never would: her heart.
—-
Game of Thrones meets From Blood and Ash in this epic new series recommended for an adult audience.

Sean McKenna joined the Coast Guard to save lives. Now a flight mech, he loves living and operating in the wilds of Alaska. When a mission goes terribly wrong, Sean is badly injured. But no pain can compare to the guilt he feels over the loss of his best friend. It was Sean’s job to keep Justin, the rescue swimmer, safe. Now Justin is dead, leaving his wife, Eden, without a husband and their toddler son, Maverick, without a father. The best Sean can do is step up and help Eden in any way he can. As the months go by, he finds himself fighting a growing attraction to her. He knows people on base are talking. What kind of man hooks up with his best friend’s widow? But the heart wants what it wants, and this desire can’t be denied—because it’s mutual.

Eden Koseki loved Justin from the moment he jumped out of a hovering helicopter, swam to shore, and asked her for her name and number. She thought they had all the time in the world. Losing him and the future they’d planned together is more devastating than she could have imagined. It’s only the support of her family—and Sean’s steadfast presence—that get her through those first months of overpowering grief. But as the weeks pass, she feels unexpectedly drawn to him. When she’s with him, she’s able to smile and laugh again—especially while watching him play with little Maverick. Still, her emotions leave her torn between loyalty to Justin’s memory and the living, breathing man who makes her feel alive again.

As winter turns to summer and snow turns to rain, the heat between Sean and Eden intensifies. So does the gossip in town. Still, Eden isn’t about to let anyone interfere in her business. She knows now just how fragile life can be. When Sean’s sense of duty threatens to keep them apart, Eden knows she must help him move past his survivor’s guilt—or risk losing this second chance at deep love and lasting happiness.

What is your most anticipated June release? Let us know in the comments! 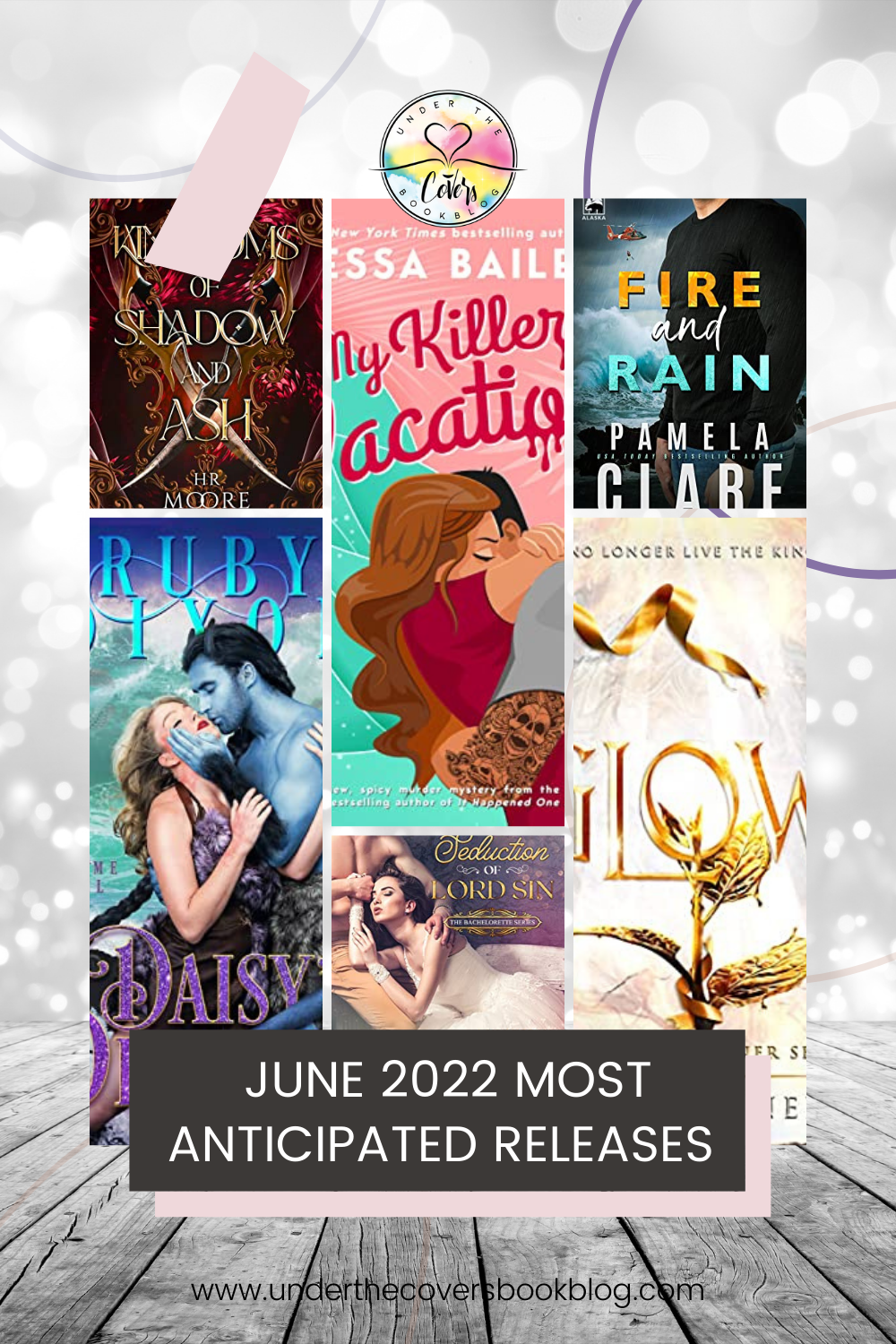