Join our newsletter to be the first to hear our latest news! Learn More
Home / Reviews / Review: Beyond the Sea by L.H. Cosway 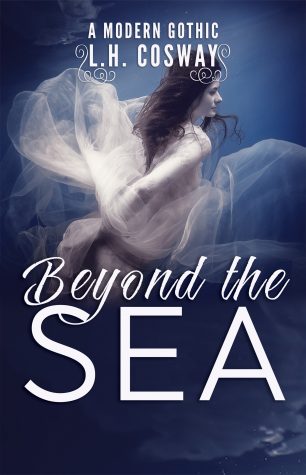 Beyond the Sea
by L.H. Cosway

“…although I did like this book and I read it quickly it didn’t quite work for me.”
~ Under the Covers

Estella’s life is like a fairytale. But not one of the bright animated Disney ones full of talking animals and dashing princes. Instead she has a wicked step mother, a crumbling old house and instead of a knight in shining armour, she has Noah. Cynical, dangerous and with a wicked agenda that will smash all of Estella’s carefully laid plans for escape.

I love L.H. Cosway, her books always offer something interesting and imaginitive. In Beyond the Sea we have a contemporary gothic romance that has the feel of a modern day fairytale. I was all in. However, although I did like this book and I read it quickly it didn’t quite work for me.

The gothic atmosphere that Cosway was trying to create never really came across to me. I wanted to be spooked by the big creepy house and have the increasing feeling of forboding that comes with a great gothic novel. But, it didn’t quite materialise. Instead of gothic undertones it seemed to just have Christian ones. Depending on your tastes this can be a good or bad thing. Estella explores her religious faith and I liked that she had the capacity to think deeply about her beliefs, but, that isn’t the same as having a gothic atmosphere.

This brings me to what I did like about this book; the characters. I really liked Estella, which surprised me, she’s a lot younger than most heroines I connect with but after all life had thrown at her she had an air of maturity. She, as I mentioned, was very religious and if I’m honest such certainty in God and religon always make me unconfortable. But Estella’s kindness, intelligence and drive soon won me round.

It wasn’t just Estella I liked. The wicked step mother was also an interesting character. As the story progresses and more secrets are unveiled, you start to form a more complex view of her character.

Now, the romance. If you’re a fan of a mysterious, dangerous and sexy stranger falling for the good girl, then this is for you. I am a fan of this and although I did like Estella and Noah, they had great chemistry, I couldn’t help but think that the dynamic was very similar to Six of Hearts by Cosway. Only, it was done so much better in that book. So, although I liked the romance, I felt like it was overshadowed and a watered down version of a romance she had already written.

I have mixed feelings about this book, because although it is an enjoyable read and written in Cosway’s brilliant style I just couldn’t connect with it. Aspects of the book didn’t work for me, or I felt like she’d done them better before. If you are new to Cosway, I would highly recommend picking up her Hearts series, which starts with Six of Hearts rather than this one. I you have read her before do give this a go, she is a fantastic writer, however, I feel like this is not one of her best.