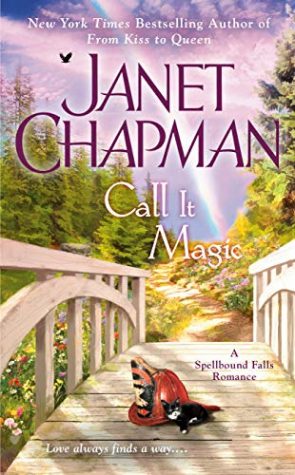 Call It Magic
by Janet Chapman

I have been a fan of Janet Chapman for a long time. I remember falling in love with her original Highlander series back when time travelling Highlanders were in vogue. Spellbound Falls is one of the spin offs series where we dive into the lives of the children of the original couples. Her series are a unique blend of Scottish romance, the paranormal and magical realism. However Call It Magic missed the mark for me.

Content warning (and also a spoiler) the heroine of this story has been a victim of rape, but it was never shown on the page. I had a massive problem with the author’s use of rape. I didn’t think it was needed for this story. For me rape should be used in romance books when it is essential and if it is used for it to be treated sensitively. Now, Chapman didn’t treat this insensitively, I want to state that straight away. However, I felt like Katy’s reaction to it was put aside for the sake of the romance. I can’t speak for the survivors of rape and how they handle the trauma, but Katy didn’t really seem to be affected. This was something that was supposed to have happened only 3 weeks before the start of the book, and yet this deeply traumatic and terrifying event seemed to skimmed over. It’s like Chapman wanted to give Katy a trauma so she could build a story around it. In my opinion, using rape was not the appropriate way to do this. Especially as the repercussions on a woman’s life after the event is never really addressed in the book.

Even putting the rape issue aside, this was a slow moving book without any real plot to push the books forward. The book consisted of Katy starting on the Fire and rescue team with Gunnar and them falling in love. And again, this was another point of contention for me. The romance seemed to appear from nowhere. They were attracted to one another and then BOOM decided they were in love. There wasn’t enough work done on the relationship between them for me to really connect with the romance.

This book was a massive disappointment for me, as I mentioned I am a fan of Janet Chapman but I couldn’t in good conscience recommend this book to anyone. It was slow moving with a lacklustre romance and raised some serious issues with me in regard to its use of rape as a plot device.

I read book one and decided this series was not for me.