Join our newsletter to be the first to hear our latest news! Learn More
Home / Author Override / Sneak Peek at J.R. Ward’s “The Caldwell Courier Journal” 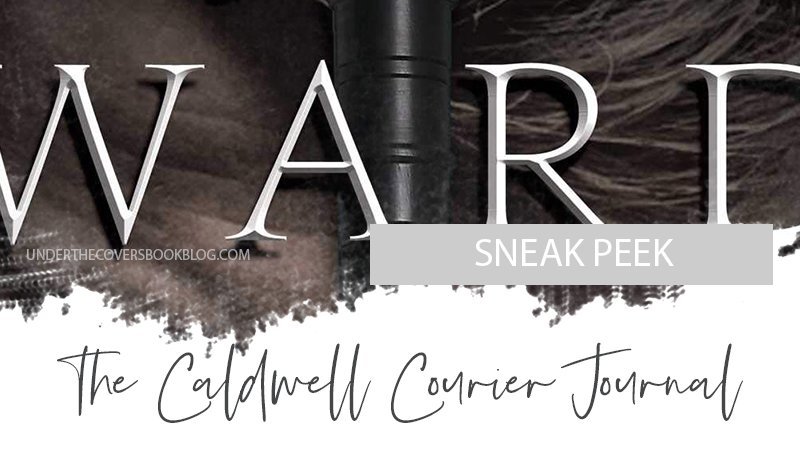 Who better to ask for honest, snarky relationship advice than Vishous?

Ask At Your Own Risk.

(with help from Mary)

First of all, thank you for doing this.  I need another perspective.  I am a 27 year old woman, about fifteen months out of a five year relationship.  I started dating a guy about two months ago.  I’ll call him “Evan.”  We met on Match.com.  We both workout.  We like a good time out at the clubs and the bars.  We’re both Sox fans.  He’s funny and he’s been good about keeping in touch when he travels frequently for work.

My problem is this.  He told me he was twenty-eight.  A week or so ago, when we were playing pool at our local, he told me to snag his wallet and pay for the next round at the bar.  While I was getting money out, I saw his driver’s license.  It said he’s thirty-six and the address listed was in a different area of the city than he told me he lives in. I got the drinks and put his wallet back in his pocket, and tried not to think about it.

But I can’t shake the idea he lied, and it’s causing me to obsess about things that are probably no big deal.  Like, he only comes to stay at my place.  I’ve never been to his apartment, and when I asked about this, he said he has two roommates who get on his nerves and he prefers the break he gets when he sleeps at my apartment.  And I’ve introduced him to my friends, but he’s never offered to do the same.  At first, I was psyched because my ex never wanted to hang with my people.  But now?  I guess I’m uneasy and looking for shadows everywhere.

I don’t care how old he is, and I know that some times folks on Match fudge their age to make them more attractive.  And maybe it’s just an old license.  I don’t want to ruin a good thing by looking like I’m second guessing him about stuff that only appears iffy and for which there is a reasonable explanation.

On The Fence In Beantown

Vishous:  Here’s what you need to do.  Go to your local Stahp ‘n Shahp and get some Sweet Baby Ray’s  BBQ.  Then get a good knife.  After you slice his b*lls off, marinate them and then pan fry ‘em.  Serve them to him hot and spicy and-

V:  I know, because the BBQ sauce smells great, right?

Mary:  Ah, no.  It’s because we should not settle this type of conflict through bodily harm.

V:  Whatever, that lying sack of sh*t with the fake Match profile doesn’t deserve a set of nuts.  S’all I’m sayin’.

Mary:  I think we’ve heard your point of view loud and clear.  And now, I’d like to offer a more nuanced opinion.  On The Fence, it’s clear that there are some reasons to be concerned about this guy.  One of the things that I tell people in my practice is to always trust your instincts.  As much as you want to believe the best-

Mary:  I’ve never actually said this before to someone, but why don’t you light up a cigarette and take a few deep drags.

Mary:  Anyway, On The Fence, my suggestion is that you have a frank, face-to-face conversation with “Evan.”  Share your concerns calmly and succinctly.  See what his answers are.  Based on how he responds, you should be able to tell a lot.  Is he listening to you and taking you seriously?  Is he offering to have you stay over at his place?  Or is he defensive and turning everything back on you-

V:  And his Red Sox card is revoked.  He has to root for the Yankees now.

Mary:  -in a way that makes you uncomfortable?  At the end of the day, you deserve to be in a relationship with someone who’s as honest as you are and treats you the way you’re treating them.

V:  I have to agree with Mary on this one.  Even though you’re a human, being with a lying sack of sh*t is whack.

Mary:  Remember, your physical safety comes first, and fast on its heels is your emotional health.  Please do not sacrifice your happiness just because you are hoping that “Evan” is the one-

V:  I think you’re going to find out he’s got a wife and kids and he’s playing you.  Which brings us back to my solution to the problem-

Mary: -and let us know how it goes, please.  Best of luck!

Waiting for this has been MURHDER…

The Savior
by J.R. Ward

In the venerable history of the Black Dagger Brotherhood, only one male has ever been expelled—but Murhder’s insanity gave the Brothers no choice. Haunted by visions of a female he could not save, he nonetheless returns to Caldwell on a mission to right the wrong that ruined him. However, he is not prepared for what he must face in his quest for redemption.

Dr. Sarah Watkins, researcher at a biomedical firm, is struggling with the loss of her fellow scientist fiancé. When the FBI starts asking about his death, she questions what really happened and soon learns the terrible truth: Her firm is conducting inhumane experiments in secret and the man she thought she knew and loved was involved in the torture.

As Murhder and Sarah’s destinies become irrevocably entwined, desire ignites between them. But can they forge a future that spans the divide separating the two species? And as a new foe emerges in the war against the vampires, will Murhder return to his Brothers... or resume his lonely existence forevermore?

Love Vishous! Yes, waiting for The Savior has been MURHDER! OMG! I can’t wait for the showdown between Murhder and John Matthew! I hope it’s epic! So excited!!! Thanks for the sneak peek!

Love JR Ward!!! She’s so friggin fabulous!! Vishious is one of my all time fave of her characters!!! Someday I what to meet Jr ward,I will be the one pissing myself just so you know!!! Lol ! Shared on my socials!???

What a hoot! That was definite a nice range in advice column work. I can’t wait for The Savior.

A Sneak Peek of The Caldwell Courier Journal! – alexisthelectorem

[…] Just click here and you’ll be taken to a sneak peek of what to expect in the newsletter. […]

loved the letter didn’t know v had it in him.