“Ladies and gentlemen, those of you in the gate area awaiting news of flight 2672 to Tampa, I’m sorry to inform you that it has been canceled.”

The answer to that impulse was to move. To distract herself.

She tried to get up as the gate agent droned on about the storm but found herself stymied by Bennett’s large, heavy arm settling over her shoulders.

She geared up to specify that it was Monday night, that the storm was rolling in, apparently bent on stalking them, and that there was no cause for such calm optimism. But as she opened her mouth, it was like instead of expelling words from that orifice, her body got confused and sent a tear out of her left eyeball.

It was a fast-moving one that took her by surprise. She swiped at it angrily, but it did no good; he’d seen it.

“Don’t call me sweetheart.” The clapback was automatic, and it had the effect of bringing her back to herself, her teary fragility hardening into something more familiar. She twisted away from his arm and stood.

His optimism was replaced by something, too, something stonier and less kind. “So help me, Gia, if you’re on your way over there to rip that gate agent a new one, you’re on your own from here.”

The sudden switch was jarring. She had indeed been getting up to speak to the agent, but she must have still been weak enough, unshielded enough, that his threat reached some part of her that was still vulnerable.

“I’m going to the bathroom,” she snapped instead and turned on her heel.

Why was she acting like this? None of this was Bennett’s fault. And he’d been right—it wasn’t the gate agent’s fault, either.

A few minutes later, she lifted her chin, assessed her appearance in the bathroom mirror, and found it up to snuff. With a fluff of her badass blue hair, she headed back out to deal with their problem.

Gia shrieked and jumped. Bennett was standing right outside the ladies’ room. Her face got hot.

“What?” she said again. She’d been prepared to do battle—nicely; maybe a little more nicely than she would have without an audience—again with the airline. It had never occurred to her that they could just take matters into their own hands. She spent so much of her time in cities like New York and Paris that she sometimes forgot that driving was a viable option in the regular world.

“Hear me out,” Bennett said. “I spoke to an agent. They can book us on a flight out tomorrow evening, but the storm is just starting here; there’s no guarantee that flight will actually depart. Florida seems far, but actually, St. Pete’s is only a seventeen-hour drive from here—maybe a bit longer with bad weather. If we hit the road now with a goal of getting a couple hours under our belt, we can clear D.C.—hopefully ahead of the storm that’s coming—find a place to stay, and then make a big push tomorrow. Even if we have to stay one more night on the road, we can still make it by Wednesday morning, easy.”

Gia blinked, astonished by this plan. “That is—”

He must have thought she was going to protest, because he cut her off. “Look. The way I see it, we can either cool our heels for twenty-four hours and have no idea if the flight we’re waiting for will work out, or we can rent a car and head south. Take matters into our own hands.”

It was Bennett’s turn to blink. He hadn’t been prepared for her to acquiesce so easily.

“We’ve been talking and talking about this damn problem,” she said. “I hate talking. Give me a man of action any day.”

A smile blossomed, and he held out an arm like he was the star of a Reese Witherspoon rom-com.

“Then we’re off to the rental counters.” 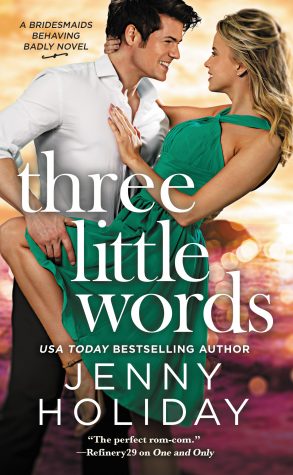 Gia Gallo is officially in bridesmaid hell. Stranded in New York with her best friend's wedding dress, Gia has six days to make it to Florida in time for the ceremony. And oh-so-charming best man Bennett Buchanan has taken the last available rental car. Looks like she's in for one long road trip with the sexiest - and most irritating - Southern gentleman she's ever met...

Bennett's pretty sure that if there was ever a woman to break his "no flings" rule, Gia would be it. Sure, she's stubborn. She's also funny, smart, and the attraction between them is getting hotter with every state line they cross. While Bennett doesn't do casual, Gia doesn't do "relationships." But if they break the rules, this unlikely pair might discover that their impromptu road trip could turn out to be the best ride of their lives.

Jenny Holiday is a USA Today bestselling author who started writing at age nine when her awesome fourth-grade teacher gave her a notebook and told her to start writing some stories. After a detour to get a PhD in geography, she worked as a professional writer, producing everything from speeches to magazine articles. Later, her tastes having evolved from alien invasions to happily-ever-afters, she tried her hand at romance. She lives in London, Ontario, with her family.

This will be mine when it comes out…thanks!

Awesome excerpt! Shared on my socials!😉💖