Join our newsletter to be the first to hear our latest news! Learn More
Home / Interviews / Interview and Giveaway with Amanda Bouchet, Jennifer Estep, Jeffe Kennedy and Grace Draven 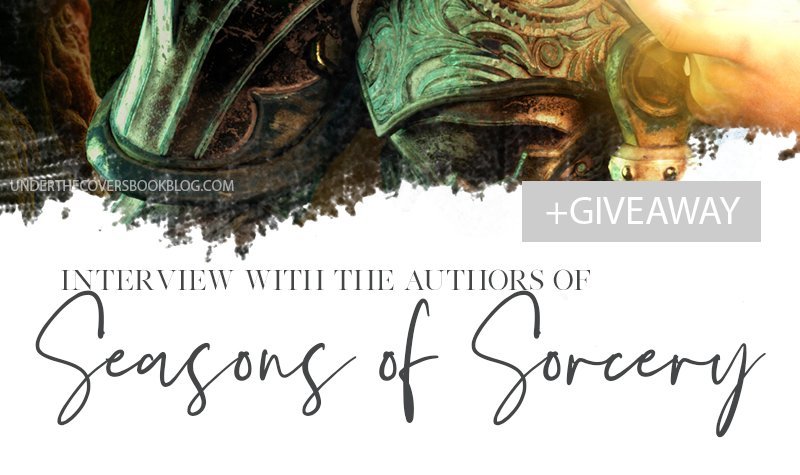 Today we are excited to welcome to Under the Covers 4 amazing authors that we have read and enjoyed previously and that have teamed up to bring us a fantasy anthology!  SEASONS OF SORCERY has a theme of… you guessed… seasons!  Lets find out more of how this anthology came to be.

Welcome to Under the Covers!  We are so excited to get to talk to you all about your latest project SEASONS OF SORCERY!

Jennifer Estep: Thanks for hosting us. We appreciate it!

Jeffe Kennedy: Thank you! We’re so excited to get it into the hands of readers.

What can fans expect from this anthology?

Amanda Bouchet: Thank you for inviting us! I think SEASONS OF SORCERY will give readers a bit of everything: adventure, drama, action, intrigue, romance… Pretty much all the feels! With my novella, A CURSE FOR SPRING, my goal was to keep readers on the edge of their seats and pull at their heartstrings.

Jeffe Kennedy: This is a terrific collection of four authors who haven’t had stories all in one collection before. Amanda, Grace, Jennifer and I all write on similar themes, but in different ways. All of us deliver exciting heroines who fight for what matters and heroes who love and support them.

How would you describe your story in this anthology in 3 words?

Jennifer Estep: Autumn is my favorite season. I love seeing all the red, yellow, and orange leaves, along with the cool nights and warm days. Winter is a close second, though. I also love snow.

Amanda Bouchet: There are things I love about every season, but fall has always been my favorite. It’s partly mixed in with nostalgia for where I grew up, and the feeling I still have when I think about autumn in New England. The crisp air, clean and cool and smelling fresh and woodsy. The crunch of leaves under my feet and the flaming fall colors all around me. The hint of woodsmoke perfuming the air. Pumpkin patches, carving jack-o’-lanterns, and trick-or-treating. Apple cider mulling on the stove and red and orange and gold maple trees. Added to that, Thanksgiving is my favorite holiday!

Grace Draven: Autumn, which is one reason why I was thrilled to be able to write in that season’s time frame. I live on the Texas Gulf Coast. Autumn means temperatures finally drop out of the 90s and on nights when it isn’t too humid, we can open the windows instead of running the AC. We don’t get real leaf-fall until late December, so it’s the cooler weather we celebrate by grilling (Fall is our grilling season) outside, attending festivals and faires, and looking forward to my favorite holiday of the year – Halloween.

Jeffe Kennedy: Autumn. Did we all pick autumn? I’ve always lived in places with all four seasons, and I love them all for different reasons. I’m not sure I’d be happy living somewhere that didn’t have one or more of them. But I love autumn for the burst of energy it brings, the way the plants all pack in nutrients for the winter ahead. I love how hot and bright the sunshine is, streaming through chilly air, and how blue the sky gets. The sunrises and sunsets have more brilliant color, too. And I love the festivities autumn brings, with the celebration of the thinning of the veil at Samhain/Halloween/Dia de los Muertos, the festive gatherings at Thanksgiving, and the glittery onset of Christmas.

Other than your own books, what are some of your favorite Fantasy books?

Jennifer Estep: One of my all-time favorite books is Beauty by Robin McKinley. It’s a lovely retelling of the Beauty and the Beast fairy tale. When I first started reading fantasy books, one of my favorite series was the Elenium epic fantasy series by David Eddings.

Amanda Bouchet: I’ll always have a particular fondness for The Hobbit, The Lord of the Rings, and the Dragonlance Chronicles which were my first fantasy reads when I was an early teen. Even though the story is partially based in our own world, I think the Harry Potter books are some of the most gripping, clever, and exciting fantasy novels of our time. I also have enormous love for Maria V. Snyder’s Poison Study series because those were the books that inspired me to write a fantasy romance of my own.

Name a destination from a book you’d love to visit.

Jennifer Estep: I’d love to visit the Beast’s castle from the various Beauty and the Beast books/stories, but mainly the one from the Disney animated movie. LOL.

What’s your favorite supernatural creature and why?

Jennifer Estep: I’ve always loved the idea of a witch’s familiar – some sort of animal/creature who helps the heroine … and perhaps offers some snarky commentary along the way. LOL.

Amanda Bouchet: I’m going to have to go with vampires because the vampires I read about are inevitably charming bad boys with (not-so-beating) hearts of gold, delicious and shiver-inducing protective streaks, smoldering good looks, piles of riches accumulated across the centuries, devotion and loyalty that, once given, are forever, and…the sex is always amazing!

Grace Draven: Hard to pick one. I’d say gryphon. It’s just always impressed me as a creature of both majesty and gravitas.

Jeffe Kennedy: I’m a unicorn girl from way back. I love the concept of the unicorn as being attracted to the female, their gifts of purification and removing poisons, and how the unicorn embodies both beauty and lethal power.

Thank you so much for sharing with us!

Jennifer Estep: You’re welcome. Thanks again for hosting us. Happy reading, everyone! 😉

Amanda Bouchet: Thank you for the fun questions!

Grace Draven: Thank you for the opportunity to chat! 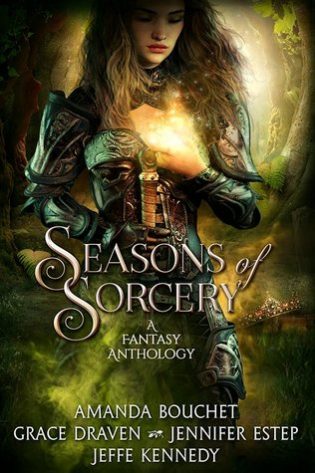 WINTER'S WEB BY JENNIFER ESTEP
An assassin at a renaissance faire. What could possibly go wrong? Everything, if you’re Gin Blanco. This Spider is trapped in someone else’s icy web—and it seems like they don’t want her to leave the faire alive . . .

A CURSE FOR SPRING BY AMANDA BOUCHET

A malevolent spell strangles the kingdom of Leathen in catastrophic drought. Prince Daric must break the curse before his people starve. A once-mighty goddess trapped in a human body might be the key—but saving his kingdom could mean losing all that he loves.

THE DRAGONS OF SUMMER BY JEFFE KENNEDY

As unofficial consort to the High Queen, former mercenary Harlan Konyngrr faces a challenge worse than looming war and fearsome dragons. His long-held secrets threaten what he loves most—and he must make a choice between vows to two women.

A WILDERNESS OF GLASS BY GRACE DRAVEN

The stretch of sea known as The Gray rules the lives of those in the village of Ancilar, including widow Brida Gazi. In the aftermath of an autumn storm, Brida discovers one of the sea's secrets cast onto the shore—a discovery that will change her world, mend her soul, and put her in the greatest danger she's ever faced.

Jennifer Estep: Here are the opening lines of WINTER’S WEB:

I stared at my reflection in the mirror above the long counter that ran along the wall. Even though I had been peering at myself for the better part of a minute, I still couldn’t believe what I was seeing.

Normally, my wardrobe could best be described as functional. Black boots, dark jeans, a long-sleeved T-shirt, a fleece jacket if the weather was cold. I never invested a lot of time or money in my clothes, since they had an annoying tendency to get ripped, torn, and covered with other people’s blood.

But today I had left functional behind for flamboyant.

Amanda Bouchet: Here are the opening lines from A CURSE FOR SPRING:

Prince Daric touched his fingers to the giant column of mist and then jerked them back. He stared at his fingertips, but nothing had changed. His skin hadn’t reddened; the nails weren’t blackened. Nothing, in fact, had happened.

With a nervous swallow scraping down his throat, he turned his head to check that no one had followed him from the royal encampment. The dying forest stared back with gnarled eyes, everything brittle, creaking, and ready to catch fire. Nothing disturbed the too-dry branches, but it was only a matter of time before someone noticed he’d snuck off and came looking for him.

Grace Draven: Here are the opening lines from A WILDERNESS OF GLASS:

The vestibule just outside the busy kitchens hummed with conversation and the thump of boots as the musicians gathered there to exchange their muddy footwear for clean shoes they’d carried with them during the slow wagon ride up the castle hill.

Jeffe Kennedy: Here are the opening lines from THE DRAGONS OF SUMMER:

“Inspecting the defenses yet again?”

Ursula’s question startled me, as I’d been so deep in thought I’d missed her approach. From my vantage on the walls of Castle Ordnung, I’d been contemplating the lush, green and apparently peaceful countryside. The early onset of summer seemed to please the locals. For farmers and merchants, the fair weather brought welcome warmth for crops and dry roads for trade.

For a warrior like me, dry roads meant enemy forces could reach the seat of the Thirteen Kingdoms all that much more easily—and fair weather only made it easier to pillage freely and set fire to the rest. 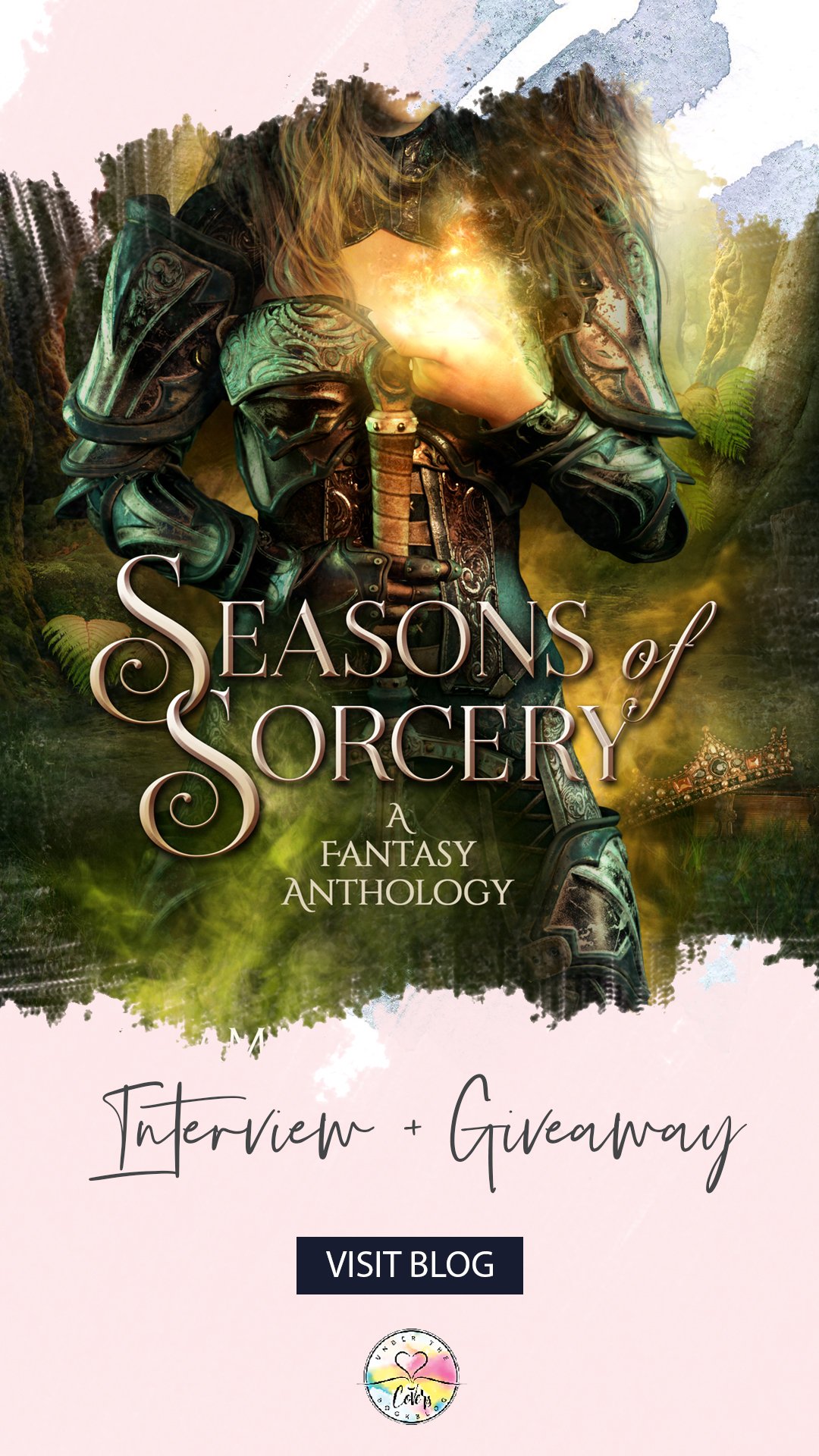 Autumn as well. What a great anthology and a gorgeous cover.

This sounds so amazing and OMG that cover! Wow

Fabulous interview!!! Love this we cover and book introduction!! On my tbr gr list!! Shared on all my socials!! I have always loved fall beautiful colors and smells and my fave holiday halloween!!??

I’ve already pre-ordered so not entering the contest. Just want to say I am looking forward to reading this!

My favorite season is autumn. And I want to say I am tired of only having a few days of it between summer heat which lasts longer and longer and then boom, snow. I miss having weeks of cooler weather and all the rest.

I love Christmas! I start to play vintage Christmas music right after Halloween 🙂 thanks for sharing!

Autumn is my favorite season.

I had no idea this was coming out. I must have it. Loved the fun interview. I’m a winter gal, but I do love autumn too.

My favorite season? Since im a total beach bum at heart, Summer ! I love being warm and the smell of Hawaiian Tropic while collecting seashells on my favorite beach

Fall is my favorite season.

My favorite season is fall. Cooler temps and pretty leaves!

I’m so freaking excited about this book! And look at that glorious cover!

I have two fave seasons: fall and spring.

I love fall, the cooler temperatures, the lovely leaves and lots of apple cider. Thanks for the giveaway!

There are so many amazing books coming out in Sept