Join our newsletter to be the first to hear our latest news! Learn More
Home / Interviews / Interview and Giveaway with Kelly Bowen 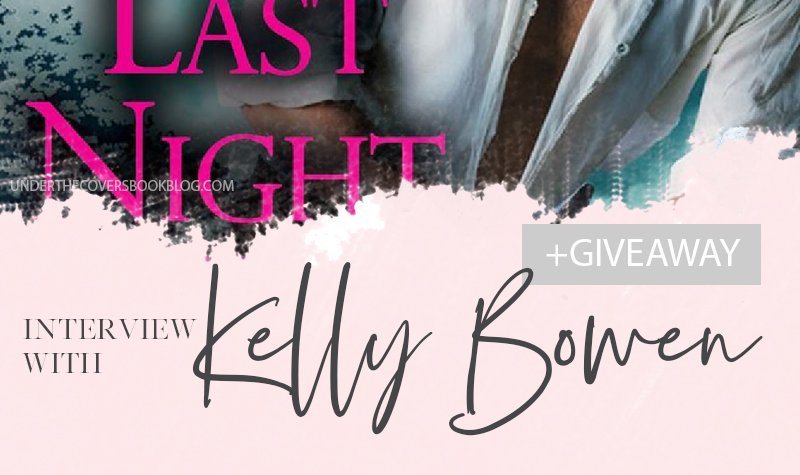 Welcome to Under the Covers, Kelly! We’re so excited about your newest book, LAST NIGHT WITH THE EARL. Eli sounds like the perfect hero. Where did the inspiration for him come from?

Thank you so much for having me! I’m thrilled to be here talking about Last Night With the Earl.

To answer your question about a perfect hero, Eli might be one if only because of his imperfections (or the imperfections that he initially sees in himself and struggles to overcome). For inspiration, I had to look no further than any social media platform out there. Platforms where people are instantly judged by appearance (or a change in appearance) and face social scrutiny that can be beyond cruel. Society then, like society now, put a great deal of emphasis on appearances and the perfect, golden illusion of a perfect, golden life. Eli’s experiences changed him, not only physically, but emotionally too, and this is his story of reconciling the man he was to the man he wishes to become.

If you had to describe this book in three words, what would say?

What’s your favorite thing about Rose?

Rose was an interesting character to write. I love that she is strong and courageous, a relentless warrior and advocate for the women around her. Yet she avoids applying that strength and courage to face her own personal struggles. In the end, my favourite thing about her was that she was honest enough with herself to recognize that and went one step further and accepted help from Eli. She allowed herself to be vulnerable.

What was the biggest obstacle you faced while writing this book? How did you overcome it?

While I wanted the hero and heroine to perceive themselves as imperfect and to struggle with those perceptions, I did not wish for them to become mired in self-pity. No one likes a whiner, and I tried to take great care not to let them wallow but instead, to grow. To that end, I tried to keep the honesty between the characters consistent throughout, and brutal at times. Because Rose and Eli had a past together, I think both were more comfortable with that sort of bluntness and perhaps expected it. More than once, they asked each other hard questions with expectations of a real answer.

What do you do when you get stuck?

If I get stuck while writing at a certain point, I usually skip ahead in the story and start writing a new scene. That usually shakes the spiderwebs out and answers whatever question I’ve become stuck on!

I turn the internet off while I write. If I’m connected, it’s so easy to do a ‘quick research jaunt’ which inevitably turns into a four-hour research rabbit hole that has nothing to do with your original question! I simply make a note to verify or check a fact later, and continue writing.

Who are three authors that turn you into a fangirl and did you ever have an embarrassing moment with any of them?

The authors for whom I would consider myself a fangirl would be:

Susanna Kearsley, who writes such beautiful emotion and impeccable history.

Sarah MacLean, who writes exceptionally clever stories and is never afraid to write out of the box.

Julia Quinn, who originally got me hooked on Regency romance with her incredible tales.

And I’ve had the privilege of meeting each of them and all have been nothing short of gracious and kind. I don’t think I’ve embarrassed myself too much in front of any of them!

A couple of things in the works – first, I have some ideas for a story for the character of King, the mysterious underworld personality from my Season for Scandal series. He also shows up in Last Night With the Earl by popular demand, and again in book 3 in this series, Rogue by Night…

Second, a World War 2 tale that I’m currently researching. I am a bit of a WW2 history buff and would love to write in this setting. 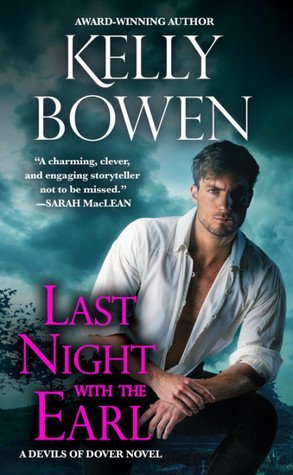 Last Night with the Earl
by Kelly Bowen

After Waterloo, Eli Dawes, Earl of Rivers, was presumed dead-and would have happily stayed that way. He's no longer the reckless young man he once was, and only half as pretty. All he wants is to hide his scars away in his country home. But when he returns home and tries to sneak into his old bedroom in the middle of the night, he's shocked to find someone already there.

Rose Hayward remembers Eli as an arrogant rake who helped her late fiancé betray her. Finding him stealing into the house currently rented by Haverhall School for Young Ladies doesn't correct her impression. Her only thought is to get him to leave immediately. Yet the tension between them is electric, and her painter's eye can't help but admire him, scars and all. He might be back from the dead, but now Rose will do anything to make him feel truly alive.

Kelly Bowen grew up in Manitoba, Canada. She worked her way through her teenage years as a back country trail guide and ranch hand. She attended the University of Manitoba and earned a Master of Science degree in veterinary physiology and endocrinology.

But it was Kelly's infatuation with history and a weakness for a good love story that led her down the path of historical romance. When she is not writing, she seizes every opportunity to explore ruins and battlefields.

Currently, Kelly lives in Winnipeg with her husband and two boys, all of whom are wonderfully patient with the writing process. Except, that is, when they need a goalie for street hockey.

The story sounds good even if the cover is just ok.

I agree with her on Sarah MacLean and her books

Great interview and giveaway!! Love this cover!! Shared on all my socials!!??

congrats on the new release! This looks and sounds awesome 🙂 thanks for sharing!

I’ve been waiting for this book!

Thanks for the post, I’ve been reading more historical romances lately.

Luv the fangirl question. Great interview, UTC! (Also did it again: switched my answers to the Pinterest and IG; still following, though.)

Thanks for the interview & giveaway.

Omg ? i love Julia Quinn too! The Bridgertons ! I was hooked and read everything from her. She’s an absolute one ☝ clicker!?

This book sounds like a great read, can’t wait to read Eli and Rose’s story!

I’m a huge fan of Kelly Bowen’s books. And love it that she’s from my hometown!